Last year, I came across the Satechi Bluetooth Smart Pointer Mobile Presenter and to my delight, it worked as advertised. Finally a "normal" remote control that worked with my iPad. It's so much nicer to use than the rather clunky iPhone or iPod with Keynote Remote on it.

And then Apple released iOS 7 and Keynote for iOS 2.0 and the Satechi remote stopped working. Bummer.

A few days ago, I received an email from Satechi support pointing out that things seem to be working again now with iOS 7.1 and Keynote 2.1, which triggered me to try it out again. Here's what I found:

Controlling a Keynote presentation on the iPad itself (without an external display) seems to work now. Advancing a slide makes a sound, though, so you will have to switch sound off entirely. Also, depending on what's on your slides, a frame may be showing up, indicating the currently selected object. That could be a problem in some situations, I guess.

According to Satechi support, mirroring a presentation via an Apple TV also works. Since I don't have an Apple TV, I wasn't able to confirm this. 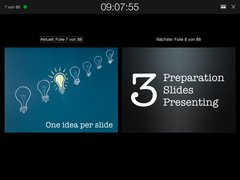 Things change when you connect an external display, e.g. via the VGA adapter, which is still the most common setup for me, when I'm presenting. You can actually advance slides in this setup, but only with the play/pause button on the remote. The left/right buttons do not work in this setup; which also means that you can not go back a slide.

Note that you have to actually move the focus (using the up/down keys) on the presenter screen to the text above the slide preview to be able to advance slides. But that's only logical, since otherwise the focus would be on one of the other controls and pressing the play/pause button would trigger that function.

I have contacted Satechi support again and they confirmed the issue. They assume the problem is in Keynote and promised to contact Apple about it.

There's some progress here (over iOS 7 and Keynote 2.0, when things didn't work at all), but it's not quite there yet. Depending on your exact requirements, you could start using the Satechi Smart Pointer with Keynote 2.1 and iOS 7.1 for your presentations now.

In my case, not being able to go back easily is a no-go. In my experience, it just happens too often that you have to go back a slide; either because you accidentally pressed forward twice or since someone in the audience has a question about the previous slide. In these cases, it's important to be able to go back quickly and easily.

So I'm downgrading to the trusty Keynote 1.7.2 again now and will wait for news from Apple and Satechi. I'll keep you posted.

"Quick Update: Satechi Remote, iOS 7 and Keynote 2 - still not quite there" by Dirk Haun is licensed under a Creative Commons Attribution-ShareAlike 4.0 International Licence.

Here's what others have to say about 'Quick Update: Satechi Remote, iOS 7 and Keynote 2 - still not quite there':

[...] or on your actual slides. The positive surprise was that PowerPoint actually works with the Satechi Smart Pointer ( unlike the current version of Keynote). You can move forward and backward through your slides with the remote. Summary Without [...] [read more]

[...] few (mostly minor) features, but most of all, it stopped working with the Satechi Bluetooth Remote. After some failed experiments , I decided to continue using the old app (version 1.7.2) for as long as possible. Recently, though, the old [...] [read more]

With Pages 2.2 (1259) the Satechi remote control works again with an external display connected via the VGA adapter! Triple click on the home button starts the accessibility mode and you can go through the presentation forward and backward. You still have to mute sound. As a plus: It also works with the new Powerpoint app.
[ Reply to This | # ]

Thanks for trying it out, Martin. I have a couple of presentations coming up, so I'm not going to experiment with a new version just now, but I'm looking forward to finally making the switch.

Btw, I did mention that the Satechi remote works with the PowerPoint app in my short review.