I attended TEDxZurich recently; a very well-organised event, quite a bit bigger than our own TEDxStuttgart. Having Swiss television as your sponsor does help, I guess. Especially if they provide you with a TV studio and real cameras.

There was one small thing that irked me, though.

All the seats in the studio were on the same level, for the entire audience of several hundred people. As a consequence, people in the back probably didn't see much of the stage. Which is where the TV cameras come in, since they provided a live picture of the speaker on a screen above the stage. Nothing wrong with that; in fact, it was a nice gesture and service to those in the audience who got a less than ideal view of the stage.

The problem, however, was that the same screen was also used for the slides; and so someone had to switch between the two "feeds" at the right moment. In my opinion, this didn't always work so well. 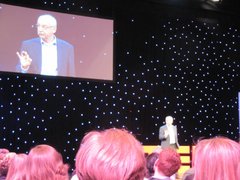 Let me explain what I mean with my 3 favourite talks from the event: Gerd Gigerenzer gave a great talk completely without slides (Video). So during his talk, the screen only had to show him.

Sean Dromgoole used only a few slides (Video). So most of the time, it was okay to show him on the screen. But there was at least one situation where he wanted to refer to a slide that wasn't visible at the time, which caused some irritation. Now Sean is obviously an experienced speaker, so it didn't faze him at all or threw him off. Later on, another speaker ended up in a similar situation and was obviously much more irritated by it.

For contrast, Ian Livingstone used a lot of slides, often in quick succession (Video). During his talk, whoever controlled what's on the screen had problems even finding the time between slides to actually show the speaker.

A simple fix for this setup could have been to use two screens - one for the slides and one to show the speaker. My main point, though, is something else:

I think it's important to give the speaker full control over his or her slides, at all time during their presentation.

In my opinion, once the speaker is up on the stage, it's entirely their show. You selected, invited or paid them to speak at your event and now is the time to hand control over to them and let them do their thing. This includes giving them control over their slides.

On a related note: Give your speakers a remote control, and a proper one at that.

Garr Reynolds (in his book Presentation Zen) shares the story of a CEO that had to command his crew to advance the slides. Which didn't work too well and so he eventually gave up on his slides entirely and told his story without them (a rare ability among CEOs). I haven't seen this sort of setup in a long time, fortunately. There's no technical reason I can think of not to give a remote control to a presenter these days. They usally have a very long range, so even if the computer with the slides is at the other end of the room, they will still work.

Scott Berkun tells another story in his book: He was given a remote control that only had one button, to advance the slides. To go back, you would have to signal to the crew controlling the projector. You can guess what happened: He promptly pressed the button too hard and flew through the first couple of slides, which threw him off course. Fortunately, this seems to be a very rare case of such an unusual setup. In fact, most remote controls these days seem to have too many buttons, not too few.

Amanda Palmer's famous TED talk could have been a tiny bit better if they had given her a remote control with real buttons (instead of a touch screen), so that she wouldn't have had to look at the remote every time she wanted to advance her slides. I think that especially for less experienced speakers (those that don't give a lot of talks), it's important to make things easy for them, i.e. give them a simple remote control, with real buttons.

While this article is mostly aimed at conference organisers, I'd also like to encourage any speakers reading this to think about their choice of a remote control. First of all, please use one; and then, pick one that is easy and reliable to use (the simpler the better, but not too simple - see above). It's just a small piece of the big puzzle that is a good presentation - but it's one that's easy to address and improve.

(Image credits: Photo of Gerd Gigerenzer at TEDxZurich by yours truly,
the photo of Amanda Palmer is a screenshot from her TED talk)

"Who controls the Slides?" by Dirk Haun is licensed under a Creative Commons Attribution-ShareAlike 4.0 International Licence.

Here's what others have to say about 'Who controls the Slides?':

[...] but can not advance slides. Most of all, there's no way to go back to the previous slide! Which, as explained elsewhere , is a function you really want to have easily available to you. You can actually browse through the entire slide deck [...] [read more]

[...] Pointer with Keynote 2.1 and iOS 7.1 for your presentations now. In my case, not being able to go back easily is a no-go . In my experience, it just happens too often that you have to go back a slide; either because you accidentally pressed [...] [read more]

[...] all makes sense. For your usual presentation, my original point still stands: The presenter needs to have full control over the slides . But then you usually have enough time to correct mistakes. When you are in a situation where every word [...] [read more]