Note: This article will not do PowerPoint justice since I do not have an Office 365 subscription - and without it, you can't edit presentations in this version of PowerPoint; you can only view and present them.

Rumours about an iOS version of Microsoft's Office suite have been floating around for a long time. Apparently, it was mainly held up by company politics. Now that Microsoft has a new CEO, some of those politics seem to have changed and Office for iOS is available from the AppStore. The price? The apps are free, but you need a subscription to Microsoft's Office 365 service to create new documents or edit existing ones. The service costs $10/€10 per month or $99/€99 per year for home use (other pricing options available for businesses and for students). This applies to all 3 apps (Word, Excel, and PowerPoint).

I'm only going to look at PowerPoint here - without the subscription, so I'll only be able to use it to view PowerPoint presentations. 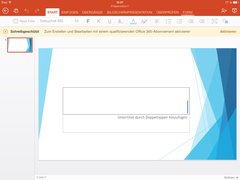 After clicking through a couple of welcome screens which try to sell you a subscription, you'll end up on the main screen. It may look like you would be able to create a new presentation now, but when trying to do so, you'll find out that you can select a theme and proceed to edit the first slide - and that's about it; the keyboard doesn't even show up, none of the buttons respond.

So back to the viewing bit: The "Open" icon will attempt to connect to Microsoft's cloud services. If, like me, you don't have an account there, this won't help you. So how do you even get a presentation into PowerPoint? Turns out there are two ways:

You can either open a PowerPoint presentation in another app, for example DropBox, and then send it to PowerPoint from there. Or you can add presentations in iTunes and have them synced to the PowerPoint app on the iPad.

With the first method, the presentation is only available within PowerPoint until you attempt to open another. This is unusual and unlike other apps handle this. It could be a bug, actually. Presentations that have been synced stay in PowerPoint and are available via the iPad icon (under "Open").

I've tried a few presentations, in both .ppt and .pptx format, and they all looked fine. PowerPoint refused to open one defective .pptx file (it really was defective), but that didn't cause any other problems.

To my disappointment, there's no dedicated presenter screen. When you connect an external display, PowerPoint only mirrors what's on the iPad screen. That's not very useful. 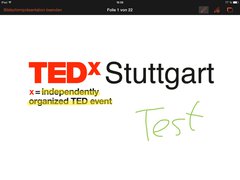 There are some tools available when presenting: You can use a "laser pointer", like in Keynote. I.e. if you tap anywhere on the screen and hold the finger down, a red dot appears that you can use to point things out on your slides.

There's also a minimalistic toolbar that you can pull down from the top. On the left, it has an option to end the presentation. On the right side, three icons let you switch to a mode where you can draw on the screen. You can change the pen color (not to black, though, for some reason), use the pen as a highlighter, and switch between drawing on an empty black screen or on your actual slides.

The positive surprise was that PowerPoint actually works with the Satechi Smart Pointer (unlike the current version of Keynote). You can move forward and backward through your slides with the remote.

Without a subscription to Microsoft's Office 365 service, PowerPoint on iOS is really only a viewer for PowerPoint slides. But at least there's now an official way to view and present PowerPoint presentations on your iPad (and iPhone); all the other available options, including Keynote, often have problems with some details of the PowerPoint formats.

The support for the Satechi remote was a nice surprise, but the lack of a presenter screen is a disappointment. Maybe it'll get added in some future update, but I was surprised that such an essential function was missing in what looks like a well thought-out product otherwise (as far as I can tell without using the editing functions).

"A First Look at PowerPoint on the iPad - as a Viewer" by Dirk Haun is licensed under a Creative Commons Attribution-ShareAlike 4.0 International Licence.

I am using the satechi bluetooth pointer with iPAD Powerpoint App!!!
[ Reply to This | # ]
Version 1.1 of Powerpoint came out on 31st July and it has several new features. First of all a dedicated presenter screen (very similar to the one present in the desktop version) is now available. A not so obvious feature but a really nice surprise is the fact that the Satechi smart pointer now works in the presenter mode, you no longer have to switch to the accessibility mode before you start your presentation (which was - at least in my opinion - a clumsy workaround).
[ Reply to This | # ]