At a conference I attended recently, I noticed quite a few speakers that didn't seem to have put a lot of thought into the end of their presentation. Yet when you come to the end, your audience will start paying more attention again; this is something you should make use of to ensure that they remember your message better.

There are two aspects here that I want to draw your attention to: One is the way you end. I've written about this before: You have to let your audience applaud. "Thankyouanyquestions?" - and believe me, I'm hearing this a lot - is not a good way to end your presentation. 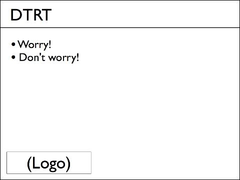 The other aspect is that talks often lack a strong closing slide. As an example, I recreated one such slide from the above-mentioned conference here. Yes, that's a total of 4 words (one abbreviation and 3 proper words) squished into the upper left corner of an otherwise empty slide (not counting the logo at the bottom, which had also been there on all of the previous slides).

I'm not sure if the majority of the audience knew that DTRT stands for "Do The Right Thing" (fortunately, the speaker did spell it out). The message, as expressed by the two bullet points, was pretty much that sometimes you do have to worry and sometimes you don't. So technically, the bullet points did summarise that message. I think it would have been better and more memorable, though, to use a complete sentence instead and maybe use an image that shows something contrasting to support that message. Or maybe, if you want to keep it minimal, place the words on either side of the pictured contrast.

Alternative Slides - The Making Of

As an experiment, I thought I'd show you how easy it is to come up with a better, more visual closing slide for this talk. Within a few minutes of brainstorming, I drafted these four alternatives. 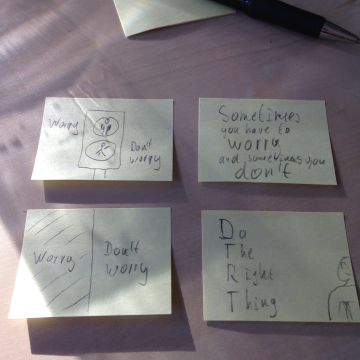 As you can see, all it takes is a pen and Post-it notes or a piece of paper. These are just rough sketches to capture the idea. They don't have to be pretty (I can't draw, obviously, and it's not a required skill here).

Later, I sat down and created actual slides based on these sketches: 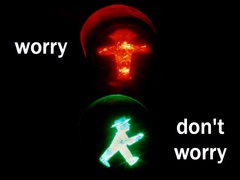 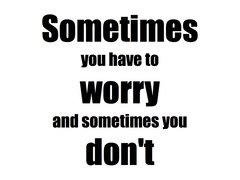 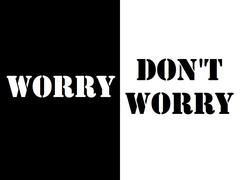 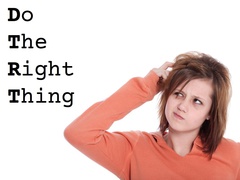 These took me less than 30 minutes to create (including the time to search for the traffic lights photo). Surely you can invest half an hour into the most important slide of your talk?

Now, I'm not saying that these slides are perfect. In trying to get from the sketches to actual slides, I ran into various problems, like finding the right visuals, finding the right font, and just basic lack of graphic talent.

The traffic light slide, for example, has several issues. I had originally imagined it with a white background but couldn't find a photo of traffic lights on a white background (I didn't try the commercial stock photo sites, though - they probably have something useable). Also, the little green man was originally walking to the left - away from the text - on the actual traffic light, so I had to mirror the image. I'm also not too happy with the font - I think it should be rounder, to match the round lights.

The "wordy" slide could probably do with some colour. I had originally imagined it using words in different colours and maybe not so strictly centred. Someone with a little more artistic talent could probably do that easily - I can't.

The font in the DTRT slide somehow doesn't look right to me but I can't put my finger on what's wrong with it. I had the photo of the girl already in mind when I made the original sketch (I've used this photo before in another context).

My personal favourite to come out of this little experiment is the black/white slide. It's simple yet powerful and, unlike some of the others, looks just right to me.

Verdict: If I had to give this talk and had the time, I would probably have another go at the traffic light motive, this time aiming at a white background. Otherwise, I'd go with the black/white slide.

I hope this little experiment gives you an idea how easy it is to come up with and try out some alternative designs. It's not that much work and it did result in at least one useable slide that is - obviously, I hope - a huge improvement over the original. And again, it should be worth investing that little bit of extra time into your most important slide.

"Put more Thought into the End of your Presentation" by Dirk Haun is licensed under a Creative Commons Attribution-ShareAlike 4.0 International Licence.