I'm not a designer. Yet, in order to create (i.e. design) more effective slides, you need to be familiar with at least a few of the basic principles of design.

One example that I use (in the book as well as in the workshop) is the Rule of Thirds. 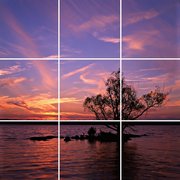 Instead of dividing your slide into four equally sized pieces (two horizontally, two vertically) and aligning your elements along those lines (i.e. centring them), divide the area into nine pieces (three horizontally and three vertically) and use the resulting grid for alignment.

Now, I'm often asked if the Rule of Thirds is related to the Golden Ratio. It's not. For the Golden Ratio, the canvas is separated at a ratio of approximately 5:8 whereas for the Rule of Thirds it's obviously 1:2. I've come to the conclusion, however (and any designers reading this please correct me if I'm way off-base), that both are just variations of one of the basic design principles, which is:

If you make it different, make it very different.

So whether you prefer the Golden Ratio or the Rule of Thirds (or something else entirely) doesn't really matter that much. Just make sure it's really obvious that you wanted things to be off-centre. As designer Robin Williams puts it: Don't be a wimp.

Thanks to Pierre Morsa for helping me understand these things better.

Here's what others have to say about 'Don't just make it different - make it very different':

[...] do with some colour. I had originally imagined it using words in different colours and maybe not so strictly centred . Someone with a little more artistic talent could probably do that easily - I can't. The font in the DTRT slide somehow [...] [read more]