I attended a low-key concert recently. The opening act was a young man with an acoustic guitar. Nobody in the audience was familiar with his music. At the end of each song there was this awkward pause: Was that it? Can we clap now?

Presentations often end like that - they have no clear ending. Don't do that. Do something that tells your audience: I'm done, you can applaud now. 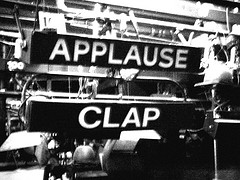 Some speakers seem to think that when they end on a strong note or repeat their main point, it's clear when they're done, simply because they stop talking. But that doesn't really work; in fact, the audience may think there's "one more thing" to come - and will wait for it. A musician can make it clear that he's done by putting down his instrument; as a speaker, you don't usually have that option.

So be explicit: Say Thanks for listening or simply Thank you. Just make it absolutely clear that you've finished.

Other speakers, and I've seen this several times at a recent conference, do make it clear that they're finished - but don't give the audience a chance to clap. They end with something like: Thank you - any questions? In my experience, that's even more awkward. The applause at the end of a talk (or a performance) is a ritual. Even if the audience didn't like it, they will still want to clap. It sets a clear end point.

So, as a speaker, when you're done with your presentation, thank your audience (just say Thanks or Thank you). Let them clap. Then ask if there are any questions. Don't be afraid that they would be leaving the room after the applause. To make it absolutely clear that you're going to take questions, your last slide could actually say Any questions? - just don't say it out loud yet.

Wait for the applause. You've earned it.

"Let your audience applaud" by Dirk Haun is licensed under a Creative Commons Attribution-ShareAlike 4.0 International Licence.

Here's what others have to say about 'Let your audience applaud':

[...] Presenter The quest for better presentations Don't admit it posted Monday, August 19 2013 by Dirk I often find parallels between musicians and presenters. While they are both putting on a show (of sorts), they still need to come across as [...] [read more]

[...] simple measure helped us enjoy the concert even more. This isn't the first time that a concert inspired me to think about things we can do better when presenting. Both musicians and presenters are performers (not actors, mind you). We should [...] [read more]

[...] have down pat. A strong end will also make it clear to the audience that the talk is really over and that they can applaud now. The bits in the middle So what about the part between the beginning and the end? There will usually be a couple of [...] [read more]

[...] and useful little tips in everyday life. For example, I've written about lessons I learned from concerts a few times . But you can also learn a lot simply from paying attention to how people do their work. My family recently had the need to [...] [read more]

[...] here that I want to draw your attention to: One is the way you end. I've written about this before: You have to let your audience applaud. "Thankyouanyquestions?" - and believe me, I'm hearing this a lot - is not a good way to end your [...] [read more]

[...] want it to end but they are usually too polite to just get up and leave, especially if they haven't had a chance to applaud yet. Applause helps marking the end of the talk, or at least the part where only the speaker is talking. It's somewhat [...] [read more]

[...] one and a half hours. The musicians played their songs back to back, with no pauses between them, so we only got to applaud at the end of the evening. In the meantime, we tried everything not to disturb them. That is not an environment that [...] [read more]