I had the pleasure of attending a rather unique and special evening with the American performance artist Laurie Anderson and two fellow musicians recently. The event as such certainly counted more as art than entertainment, so I'm going to ignore a few things that I would quite definitely not recommend for your usual public appearance. Most notably, that we, the audience, had to more or less sit still, in semi-darkness, for one and a half hours. The musicians played their songs back to back, with no pauses between them, so we only got to applaud at the end of the evening. In the meantime, we tried everything not to disturb them. That is not an environment that you can (or should) count on having for your next speaking gig.

If you've ever seen or heard some of Anderson's work (the entire 1982 concert movie "Home of the Brave" is available online for your viewing pleasure), you've probably noticed the strange stories she tells. Someone (can't remember who) once said that she's telling "invented facts and real fairy tales". The absurdity of her stories is what makes them memorable. The mastery lies in how she approaches them. 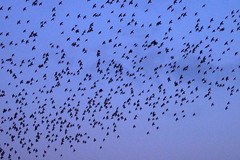 Let's have a look at one of those stories (if you've never heard this one before, I'm not going to spoil the surprise by quoting the title):

There's a story in an ancient play about birds called The Birds
And it's a short story from before the world began
From a time when there was no earth, no land.
Only air and birds everywhere.

The beginning asks us to make a leap of faith - two, actually. First of all, she tells us that she took the following from a source, but she's not very specific. "An ancient play" - but how ancient? And from which culture? This is a bit like the phrase you often hear in presentations: "studies show ...". At which point you should ask the speaker: Which studies? Can you point us to them, please?

The effect, unless questioned, is the same: It gives the following credibility; even though - at least in this case - it's probably entirely made up. But she has already drawn us in.

If we can accept the unspecific source, what follows requires us to make the aforementioned leap of faith: Obviously, there never was a time when birds existed but no land for them to land on. How would these birds have come into existence? What would they eat? How could they sustain flying all the time? What would happen if they simply stopped flapping their wings, given that there's no land that they could crash into? Oops, she's already made us accept this scenario.

And one of these birds was a lark and one day her father died.
And this was a really big problem because what should they do with the body?
There was no place to put the body because there was no earth.

Here she describes the scene in more detail before getting to the heart of the story: Something that would not be a problem in our normal world. We've already accepted the setting and even wondered about some of the potential problems of it ourselves; and now she poses a problem that we hadn't thought of before. In a way, she points out what we perceive as a flaw in her story - which makes us curious how she'd get out of this. So even though we may still be sceptical about this entire story, she has now caught our attention. What will be the solution?

And finally the lark had a solution.
She decided to bury her father in the back of her own head.
And this was the beginning of memory.

You didn't see this coming, did you? If taken literally, it would be absurd. How could you bury an entire bird in the back of the head of another, equally-sized bird? But before we have a chance to think about this problem too much, she surprises us with another statement. This was the beginning of memory? So there was no memory before that? All these birds didn't remember anything from their past? It's strange and absurd but we've already accepted billions of birds flying in a sky without land beneath them, so why not accept that in this world, memory didn't exist either?

As absurd as that idea might seem at first, it's strangely comforting when you think about it: Memory was "invented" so that we can remember our loved ones. And suddenly, we're back from this foreign and distant world, right in our own private little world, probably remembering a loved one who has passed away some time ago.

After that, there's only a short epilogue that I'll skip here. The title of the story is "The Beginning of Memory". You'll find it on her 2010 album, "Homeland".

Laurie Anderson's ability as an artist is to look at everyday events (for example, birds circling in the sky) or places or phrases (I've seen the future and it's a place about 70 miles east of here is one of my personal favourites), make a tiny change to them (e.g. take away the land) thus turning something familiar into something foreign and strange; and then build upon that.

The entire story has 170 words. Which goes to show that storytelling doesn't have to involve long and complicated plots. You can often skip most of the context and introduction to a story if you're talking to an audience that's in the same field or line of work as you are. Also ask yourself how important details such as names, times, or locations really are for the point you're trying to make. You can often trust your audience to make that leap of faith with you. The story as such and the point you want to make with it are much more important. Try leaving out as many of the details as possible if they are not relevant. Can you tell your story in 170 words or less? Try it!

("The Beginning of Memory", song and lyrics by Laurie Anderson,
photo credit: flock of birds by Martin Fisch, CC BY-SA, from Flickr)