I attended a low-key concert recently. The artist wasn't too well-known (at least around here) and the audience was rather small. The concert took place in a small venue, but it could easily have held twice the amount of people. And so they (or rather us, myself included) were standing around rather scattered and well away from the small stage.

The opening act did his best in warming up the audience (and mostly succeeded) but couldn't change the fact that it was too small an audience for the venue. The main act then did the right thing: When she came up on stage, she encouraged the audience to come forward to the stage and also to get closer together. I like to think that this simple measure helped us enjoy the concert even more. 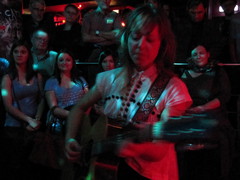 This isn't the first time that a concert inspired me to think about things we can do better when presenting. Both musicians and presenters are performers (not actors, mind you). We should be ourselves, but we're there to put on a good show with our respective craft.

As a presenter, you've probably encountered a situation similar to that at this concert: You're about to speak in a room that's too large for the audience. The next time this happens, try what the musician did and ask your audience to get closer together and sit in the rows closer to the stage. You'll be surprised that people will most likely do what they're told. As the presenter, you have some amount of authority and control. Couple that with a nicely phrased request and maybe an obvious benefit (so that I don't have to shout) and people will follow it.

As Garr Reynolds phrases it in his book, The Naked Presenter:

The excitement, laughter at the funny bits, and the overall connection and participation goes way up when you take a relatively small number of people in a large room and bring them closer to you.

Due to this bond, it will (assuming you're not boring them to death!) make the presentation a more enjoyable experience for your audience. And, quite frankly, it will also be easier for you as the presenter to keep a certain amount of control over them.

P.S. One more observation from the above concert: For the encore, the musician decided to step up the bonding experience and played one song amidst the audience ("unplugged", just with her guitar and voice). That was certainly a highlight of the concert.

This may not be easily reproducible with your average presentation, but I'd be interested to hear if someone actually tried this. Have you done it or seen a presenter do it?

(Photo of the aforementioned encore by yours truly. Thanks, Emily Barker for the inspiration.)

"Bring your audience closer to you" by Dirk Haun is licensed under a Creative Commons Attribution-ShareAlike 4.0 International Licence.

Here's what others have to say about 'Bring your audience closer to you':

[...] find inspiration and useful little tips in everyday life. For example, I've written about lessons I learned from concerts a few times. But you can also learn a lot simply from paying attention to how people do their work. My family recently [...] [read more]

Bring your audience closer to you | 5 comments | Create New Account

This should be intuitive for any speaker or teacher, I think! It's not to the taste of everyone though, as some people have expectations that a presenter will stand behind a podium and 'deliver' a lecture. I was recently marked down by a judging panel at a meeting where a number of us presented with a prize at stake, because I'd stepped away from the podium and engaged with the audience (not excessively, just asking them whether they were familiar with the concept I was presenting on, etc). They gave the prize to a presenter who stood behind the podium, stared at the computer screen, and read her (text filled) slides for 12 minutes. I got some great feedback from audience members who weren't on the judging panel though, several of them pointed out that I was the only presenter who'd actually made eye contact with my audience!
[ Reply to This | # ]

Wow, that sounds terrible. I can only assume that the panel was under the mistaken impression that content matters more than anything else in a presentation.

I was in a similar situation once after I gave a presentation for my employer: Positive feedback from the audience, complaints from company officials for not sticking to "the rules". It took a lot of time, effort and repetition before they at least let me do things my way (and they still do it their way ...).

Keep doing it your way. Some people will eventually understand while others will simply refuse to change.

[ Reply to This | # ]
This sounds like a big mistake from the jury, I always enjoy it when a presenter 'has a conversation' with the audience and consider my own presentations successful when i've also accomplished this (which maybe doesn't happen every time, but at least nobody can accuse me of hiding behind the furniture).

Keep doing the way you do things, is my recommendation.
[ Reply to This | # ]
I appreciate the sentiment, but I think in a small audience you also have to be careful not to make anyone feel uncomfortable, pressurised or too far out of their comfort zone. There are some introverts who are a valuable and precious part of any audience, but they'll walk out if you force them to do things they don't want to do. An audience is there for you to educate and/or entertain. I think it's good to encourage the atmosphere you personally want, but not to force it on any of your audience members. You'll run the risk of them avoiding you in future.
[ Reply to This | # ]

Right, force is not an option. I did use the word "encourage" above. Most people will follow the encouragement, if phrased politely. Some won't and you shouldn't force those; and in fact I don't think you can really force them, even if you wanted - they would either leave or simply refuse to cooperate in any way from that point on (and neither is what you want, obviously).