In Stupid Things Presenters do I described the irritating habit of some speakers to pick up a glass or bottle of water but never drinking from it, which can be very distracting for the audience. Most of the time, however, when speakers do reach out for water it's because they need it and intend to drink from it. Assuming, of course, there is water available for them in the first place. 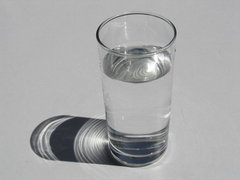 Some people can talk for hours without the need for refreshment. And there's others (like me), who need take a sip quite often. Neither is a problem or anything out of the ordinary. It's something that organisers should be aware of before the talk begins, though.

Water or something else? Water, no doubt. The reason why speakers need to drink something is because they have a problem with their voice, so anything that's added to the drink (sugar, caffeine) doesn't really help and it may even be counter-productive. Hypoglycaemia (low blood sugar) is a completely different problem.

Still or sparkling? Still water is preferable. Why? Well, let me put it this way: The gas in sparkling water will come back out again eventually. You don't want your speaker to be burping into the microphone, do you?

Cold or room temperature? Room temperature or a tad below it. The water should feel refreshing when you drink it, but it shouldn't be so cold that it impacts your vocal cords. Also, avoid ice cubes. Not only will they make the water too cold, it's also irritating to take a sip and suddenly have an ice cube in your mouth. What do you do with it? Swallow? Spit it back into the glass? Neither is a good option. And it's annoying - you just wanted to take a sip and suddenly you have another problem to handle, distracting you from your next point.

Glass or bottle? That's a more complex issue. Drinking from a glass is usually the more elegant option, but it's a logistical issue, especially if you have more than one speaker. You need to exchange glasses between speakers and make sure it's filled. Also, for speakers who need a lot to drink, they will have to refill the glass, which brings up other issues. Refill from a bottle or a jug? Where does it stand? Not to mention that the speaker is in danger of making a mess. Small bottles of water (500ml) are often the more practical and hygienic, though maybe less elegant solution. But then again, drinking directly from a small bottle is mostly considered acceptable behaviour by now.

I'm still surprised at how often I see events not preparing refreshments for their speakers. I think it's embarrassing when the speaker has to ask for some water from the stage, in the middle of his or her talk. It's only a little less embarrassing when there's water on the stage, but hidden from the speaker's view and nobody had told them about it during the briefing. And in case you're wondering: I've seen this happen at all sorts of events - from small ones up to big and prestigious ones, where building and decorating the stage probably cost a few thousands, but nobody had bothered to think of a few Euros for some water for the speakers.

"Can I have some water, please?" by Dirk Haun is licensed under a Creative Commons Attribution-ShareAlike 4.0 International Licence.

Here's what others have to say about 'Can I have some water, please?':

[...] that caught my eye ... Between the chairs of the participants, there were small tables with glasses and bottles of water on them. Additionally, they each featured a piece of thick cloth. This, it turned out, was so that you could put down the [...] [read more]

Can I have some water, please? | 0 comments | Create New Account