Panel discussion - the word alone instills dread and fear, mostly in the audience but also, I'd bet, in the hearts of the participants. There's a lot that could be said about them. In short, I have a theory that they just don't work but are often used as a "cheap" and simple measure to spruce up an event. What could be more exciting and valuable than getting insights from a group of experts on a topic, all at once?

In practice, as we all know, this simply doesn't work. The participants are often unprepared or simply not the type to make spontaneous insightful statements. So some panel discussions are scripted, at least partially, which only makes things more cringe-worthy. And in the rare case that something interesting is being said, the host has to cut the ensuing discussion short to make sure that each participant gets equal speaking time.

The above-mentioned "cheapness" also often extends to the technical setup. A very common one, for example, is to have only two microphones: One for the moderator and one that has to be passed around between the other participants. Which only adds to the awkwardness. 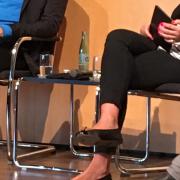 A rare example that I witnessed recently gave each of the seven participants their own microphone, which was a good thing already. And then there was one additional detail that caught my eye ...

Between the chairs of the participants, there were small tables with glasses and bottles of water on them. Additionally, they each featured a piece of thick cloth. This, it turned out, was so that you could put down the microphone silently, without it causing a "clunk" sound (or having to remember to switch it off before you put it down and then remember to switch it on again when you need it).

The panel as such was a little less painful to watch than usual but most importantly, it wasn't hampered by awkward noises and fiddling with the microphones.

"The Cloth" by Dirk Haun is licensed under a Creative Commons Attribution-ShareAlike 4.0 International Licence.