In Presenting with the iPad, I explained how the room's limitations happened to work to my advantage, given that I wanted to run the presentation off of my iPad. I thought it would be interesting to see how other speakers would deal with the limitations of this specific room. Thanks to froscon.tv, several videos from other sessions from the same weekend are now available. I've picked two below where I was mainly interested in the topic, but also watched the speakers' performance.

Please note that I don't want to criticize my fellow speakers here - I was merely curious to see how others presented in this specific room under the same circumstances (well, minus the iPad). 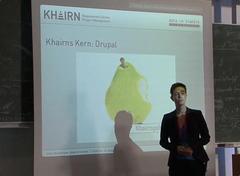 Jutta Horstmann talked about Khairn, an open source project management system. She decided to stand in front of the screen most of the time during her talk. This of course meant that she was partially obscuring her slides. In fact, she was blocking the view twice: Once by her standing there and then also due to her shadow on the screen.

It wasn't as bad as it sounds, though. For the slides that had content longer than a few keywords, she moved around enough so that you could see everything. Personally, I would have been annoyed by having the projector shine into my face for an hour. It also tends to give the speaker some odd "tattoos" (like in the screenshot).

Jutta didn't have a remote, so she had to walk back to the lectern each time she had to advance a slide. This can be very distracting for the audience, but she managed to make it less obvious most of the time. 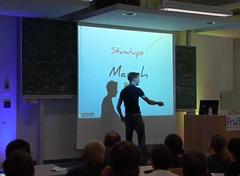 I originally wanted to go and see the presentation "Agile in a Year" by Thomas Ferris Nicolaisen, but somehow messed up my schedule and missed it. Thomas decided to stand on the left side (as seen from the audience) of the small stage. There wasn't really a lot of room there, but at least you won't stand in front of the screen then. The downside is that you lose the advantage of the convenience screen. But Thomas had his presentation down pat and didn't need the convenience display anyway. His more conversational style also worked to his advantage.

Thomas did have a remote for his laptop, but it didn't seem to work reliably, so he often had to point or even go back close to the lectern. Seeing a speaker struggle with the equipment is always distracting for the audience. An experienced speaker, and I think that's what Thomas is, can make this less of an annoyance by simply continuing with the presentation. Just keep on talking - don't start complaining about your equipment (and he didn't).

So both Jutta and Thomas preferred not to have any obstacles between them and their audience - and despite the downsides listed above, it mostly worked to their advantage. I, on the other hand, was maybe a bit too focused on trying out my new gadget, entrenched myself behind the lectern and therefore forfeited a chance to better connect with my audience.

What else did I do wrong? I haven't brought myself to actually sit through the video yet (watching a recording of yourself is painful), but I've done a fast-forward. As two first observations, I'd say I need to take care to stick to standard German more. And I need to watch my gestures and posture. I did practise, but I guess I really need to do this in front of a mirror (oh, the horror ...).

"Room HS5 at FrOSCon" by Dirk Haun is licensed under a Creative Commons Attribution-ShareAlike 4.0 International Licence.

Hi Dirk, thanks for the analysis! I really enjoyed your talk too. I didn't even notice that you were using an iPad (plus point for discreteness, I suppose). Your slides were awesome, and of course the topic of adopting DSCM is something I find very interesting.

I felt I was fighting a bit with the layout of the stage, indeed. I hate having a podium, desk, PC, or whatever between me and the audience, but I couldn't really find my way around without getting in the way of the projector.

The remote control decided that it was starting to run out of battery in the last minutes before the presentation, so I was a bit nervous about it not working. Also, Prezi (the presentation tool) doesn't work with the remote out of the box, so I was a bit uncertain about the software. Still came through though. I'm glad you liked the style, thanks for the kind words.