FrOSCon 2010 was the first real-life test for my iPad regarding two of the main functions that I bought it for:

So how well did it do?

Let's start with the easy part: The iPad did really well as a laptop replacement. With WiFi at the venue and 3G at the hotel, I was always online. Email, web, Twitter, Flickr - almost no problems there.

The only exception really was SlideShare: Before I left for FrOSCon, I uploaded my presentation to SlideShare. When I left home, it was still in the stage of being converted (strangely enough, since the slides weren't really that complicated). The next morning, I finally got a failure message. And then I found that I was unable to upload anything from the iPad. Not sure if SlideShare would even have accepted the format that Keynote on the iPad uses, but I couldn't upload a PDF either. And so I had to wait until I got home before I was able to replace my slides there. Fortunately, my upload at the conference site (again, from home, not from the iPad) had worked without a hitch and so the slides were available there shortly after my presentation (the conference site was only updated every couple of hours).

The lecture rooms at the FrOSCon venue are all slightly different in layout and so I didn't really know in advance if I would be able to use the iPad for presenting. I usually prefer to not stand behind a lectern. But since Keynote on the iPad doesn't support remote controls yet I had to consider this as an option. My Plan B was to use the PDF of my presentation that I brought with me on a USB stick. There was a PC in the lecture room that I could have used for that. 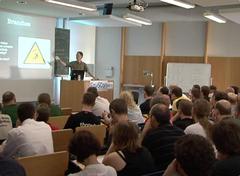 Inspecting the room before the talk, I realized that the PC didn't have a remote control either. Furthermore, the layout of the room was such that there was a lectern to the right (as seen from the audience) on a small podium with the screen to the left of it. So there wasn't really a lot of room to walk around anyway without standing in front of the screen, blocking people's view of the slides. So in a way I was lucky to be forced to stand behind the lectern, so that the lack of a remote control didn't matter.

The lectern also had a small convenience display attached to it, so that the other main shortcoming of Keynote on the iPad - lack of a presenter screen - wasn't a problem either.

The VGA adapter worked flawlessly. You only have to make sure it's really plugged in all the way, especially if you have your iPad in a case. For some reason, the connector of the VGA adapter is slightly larger than the one on the USB sync cable. While the sync cable fits nicely through the provided opening in the silicone case that I have around my iPad, things are a tad too tight with the VGA adapter. I also wish there was a way to securely fix the adapter to the iPad. When you have the VGA adapter plugged in don't move your iPad or it may slip out. I had experienced this before and therefore didn't make that mistake this time.

I had the iPad prodded up at a convenient angle against a plastic box that happened to lie around the lectern. With the silicone case, there was no risk of the iPad slipping and so it was really easy to control the presentation (mostly forward - I only had to go back a slide once).

At the end of the day, using the iPad on WiFi all day and including the one-hour presentation, my battery was still at 76% (after fully charging it the night before). So I'd say the iPad is really very usable as your portable conference device. Not only does it let you stay connected all the time, it also is quite usable as a presentation device.

Of course, I got lucky this time so that the limitations of Keynote for the iPad didn't really matter. So, to be prepared for other circumstances at the next conference: Please, Apple, give us a remote control and a presenter screen. Pretty, please?

"Presenting with the iPad" by Dirk Haun is licensed under a Creative Commons Attribution-ShareAlike 4.0 International Licence.

Here's what others have to say about 'Presenting with the iPad':

[...] The quest for light-weight presentation gear Room HS5 at FrOSCon Sunday, August 29 2010 @ 08:00 CEST In Presenting with the iPad , I explained how the room's limitations happened work to my advantage, given that I wanted to run the [...] [read more]

[...] study for using the iPad as both a conference and a presentation device. Quite a few details were different from FrOSCon . Laptop Replacement Being a web-centric event, Twitter was even more important at Barcamp, to stay in touch with what [...] [read more]

[...] Sometimes, you can get away with placing the iPad on the edge of a table but with some other rooms, this simply isn't possible . A remote control gives you a necessary degree of freedom and finally turns the iPad into a presenter's dream [...] [read more]

[...] the Keynote app running on an iOS device, i.e. an iPad, iPhone, or iPod Touch. Since this is something I had long wished for , it's time to take a closer look at this little app and see how it works. WiFi Required Keynote Remote only works [...] [read more]

you can present PDF files via GoodReader wirelessly while on w wireless network. You open a browser on the screen and enter the IP address if your iPad, which you can find at the bottom of GoodReader, behind the wireless icon. Works also through Bonjour. Your iPad shows up as a volume and you can play the PDF straight off it,
[ Reply to This | # ]

Thanks, that's an interesting idea. I've only used GoodReader's WiFi transfer option to transfer PDFs from my Mac to the iPad. Didn't occur to me to use it the other way around.

This setup is then a replacement for the Keynote app. I guess if you had a remote control for the PC with the browser on it, you would then have a way to advance your slides remotely (have to try this out). Still doesn't address the lack of a presenter screen, though.

On second thought: If you have a PDF, you could just as well run that off of the PC directly, leaving the iPad out of the equation entirely. But it's a cool idea in any case ...