It's almost a tradition by now: For the third year in a row, Phil and Pierre of Ideas on Stage have lured presentation expert Garr Reynolds to come to Europe to hold a seminar. A few things were different this year, though.

First of all, the location: The seminars took place in London instead of Paris. And, yes, seminars - there were two this year. In addition to his standard seminar, we were also treated to the world premiere of the Presentation Zen Story Telling Masterclass, an all-new seminar focusing on the art of storytelling in presentations. 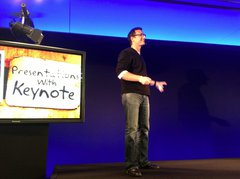 Garr had already given a presentation in Oxford on Monday and had a short public presentation scheduled at the Apple Store in Regent Street on Tuesday night, for which I showed up. The store is huge and crowded, which also resulted in not the best acoustics for the small presentation area (it was okay for the audience but I can imagine how it must have been on the stage, having been in a similar noisy setup before).

After the presentation, there was a meet-up in a nearby restaurant that specialises in flat food (hence called Flat Planet). Attendance to both events was a bit on the low side, which caused some head scratching all around - there had been a bit of a buzz on Twitter in the week before the presentation, but not a lot of people had bothered to actually show up. Oh well, their loss. 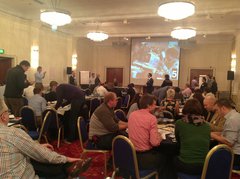 The first of the actual full-day seminars started at 10am. This was the third time now that I've attended this particular seminar and even though Garr always adds a bit of variation, I knew what was coming most of the time. That being said, there's always the chance to meet new people (since exercises are done in groups).

If you know Garr's books, the content of the seminar should be familiar. One participant in our group therefore decided that he's heard it all before (despite this being his first seminar) and spent most of the time with his iPad instead. His loss, I'd say. Even though the overall content may be familiar, the seminar is still structured differently from the books and puts the emphasis on other things in some places. If you've read the book and think you know it all, you're missing out on learning a few nuances. Most of all, you miss out on the interaction with other, like-minded people. Most of us, after all, were here to help fight bad presentations and, in our own little ways, help make the world of presentations a little bit more bearable.

Since I knew the content by now, I concentrated more on watching the seminar from a "meta" point of view, i.e. watching how Garr interacts with the audience, and seeing how people work and learn together. Of course this was an easy crowd, since the seminar tends to attract people with an open mind, so they are not only open to the ideas being taught but also to meeting new like-minded people.

Boris Bäsler posted some photos from the first day.

The second day was all about story. Interestingly, our textbook for the day wasn't one of Garr's own but Resonate by Nancy Duarte (who also sent us a short video greeting). This, as Garr explained, is because presentation coaches help each other. We're all in it together on this fight against boring presentations.

We had been asked to bring a presentation idea with us to work on. During the seminar, we had a few opportunities to further develop this idea with a partner at our table. I brought the pieces of a presentation about our TEDx event with me. We only have a very boring and general presentation about it right now, that we show to everyone we talk to. In a brainstorming session, we had already figured out that we actually have three different target groups that we're usually talking to (potential audience, speakers, sponsors) and that we needed to better address their specific needs. But we had come to the conclusion that we could get away with a generic "What is TEDx?" presentation and then tack on a portion specific to the target group we are talking to. Well, thanks to my seminar partner Ross Fisher for ripping that concept into pieces. Ross asked a lot of hard questions, many of which I hadn't asked before and quite a few for which I didn't have answers. It became pretty obvious early on that our original concept simply wouldn't work and that we would need three (maybe even more!) separate presentations specific to each target audience. The presentation for potential sponsors would have been the most important one for us but since I didn't have the right answers for some of Ross' questions, we decided to work on a presentation for the potential audience instead. We didn't get to finish it, of course, but ended up with a good concept that - hopefully - brings them from the point where they don't know about TEDx (we've seen a lot of blank stares) to the point of where they want to buy a ticket. I'll work some more on that and then try to approach our other target audiences in the same way. Thanks, Ross! 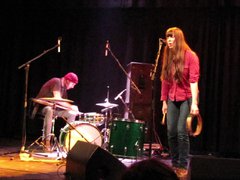 Back to the seminar: Garr had also asked a few people to give a short story-focused presentation of their own. And yes, this included yours truly. I showed a short section from my Presenting for Geeks workshop that connects an incident from a concert by a band called She Keeps Bees with what could possibly go wrong in your presentation. To be honest, I was more nervous than I thought I would be and botched at least one of my lines. You would also think that I would know by now how to handle a hand microphone - but I'm actually used to either using a headset or no microphone at all. Anyway, I hope it wasn't too bad and think that the audience still got something out of it.

Another participant who impressed me with his presentation was the aforementioned Ross Fisher. He's a surgeon by day, specialising in children's surgery. His presentation had very evocative visuals and an interesting storyline with a surprise ending.

Overall, this second seminar felt a little rough around the edges - it was obvious that this was the first time Garr was giving it and he didn't quite know which points the audience would react to best or how long some of the sections (especially the interactive ones) would take. Still, I got a lot out of it. Storytelling is, if you want, the next level you have to take your presentations to, once you've mastered the basics of targeting a presentation for your audience and improve your slides. I feel I got a little closer to it after this seminar.

Boris Bäsler also posted some photos from the second day.

Even if you are already familiar with Garr's books, it's worth considering one of his seminars. This is not only a chance to see the sensei in action but also so that you can meet like-minded people to share experiences and make new connections. Not to mention that you'll still learn a new trick or two.

As usual, the event was very well organised by Phil and Pierre and everyone else at Ideas on Stage. I'm looking forward to the next seminars, wherever they will be held (quite a few ideas for locations were tossed around over the two days, including Italy and Germany - we'll see). Thanks to Garr and the other participants for two great days in London!

(Photos in this article by yours truly)

Here's what others have to say about 'Presentation Zen European Seminars 2012 in London':

[...] originally came out in 2007 but I hadn't heard of it until Garr Reynolds mentioned it in his Presentation Zen Storytelling Masterclass in Paris last November. The author is a "professional storyteller" and also teaches storytelling classes. [...] [read more]

[...] shouldn't be talking about it. (Image Credits: "Co-op Info Session 24" by Hector Alejandro, from Flickr; Photo of Garr Reynolds by yours truly) Trackback Trackback URL for this entry: [...] [read more]

[...] that you already invested a lot of time into. (Photos by yours truly; the first one is from the 2012 Presentation Zen Seminar in London ) "On Brainstorming and Presentations" by Dirk Haun is licensed under a Creative Commons [...] [read more]

[...] the benefits, there's no excuse not to integrate them into your next presentation. (Photo from the 2012 Presentation Zen seminars in London by yours truly) "Build Interactivity in" by Dirk Haun is licensed under a Creative Commons [...] [read more]

That Fisher chap sounds a piece of work! How did you presentation come together eventually? Sure it will be great.
[ Reply to This | # ]

Hey Ross, thanks for stopping by :)

Presentation's still in progress. Got sucked into work again and the (hopefully) final round of edits on a certain ebook are also taking longer than expected. The PostIts are up on my whiteboard and giving me the reproachful look every time I walk by ...