A simple and effective way to better connect with your audience is to eradicate all barriers between you and them. Namely, avoid standing behind a lectern.

My usual advice is to arrive at the venue early so that you can spot these barriers and try to remove them. This doesn't work, however, when you're speaker number 3 in a row of 4 (with no pause between them) and the speakers before you are more traditionally-minded or less experienced and insist on using the lectern. Additionally, there's the technical aspect in that all the connectors for your laptop are often installed at the lectern and cannot easily be moved.

What can you do?

I was reminded of this problem at a recent event which featured a particularly huge lectern. Standing behind it (and the opened laptop), only the head of an average-sized person was visible from the audience. Thankfully, all 3 speakers at that event tried to avoid this - with varying degrees of success.

One of the speakers was obviously very experienced and he was also very familiar with the content of his talk. He simply left his laptop behind and stood in front of the lectern. This, in my opinion, was the best possible solution, given the circumstances. It does require that you are familiar with your talk, especially with the structure of it. Being away from your laptop, you lose the benefits of the presenter view, such as seeing your notes (if you need them) and having a preview of the next slide. If you know your talk well enough, you can easily cope with such a situation; maybe with the occasional side glance at the slide behind you.

The other two speakers were less secure and seemed to require access to the presenter view (nothing wrong with that, btw). One of them tried to compensate by standing to the right side of the lectern, so that he wasn't entirely concealed. However, that only worked for the people on the right side of the audience. From the left side, he was still covered by the lectern and in fact was now even farther away from them.

The other speaker tried various positions during his talk, mostly on the left side of the lectern, closer to the slides. When he tried to step out in front of the audience, he often found himself having to look back at his slides, turning his back to the audience. He also tried to squeeze himself between the projected slides and the lectern, so that he could glance at his laptop's screen. That now meant, however, that he was obscured from view of the people to the right of the lectern. 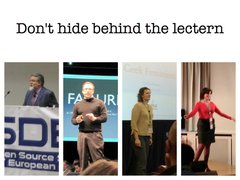 I felt for these last two speakers. They both tried their best (kudos for even trying - many speakers would simply have stood behind the lectern without realising the problem), but since they both needed to see their laptop screens there was only so much they could do, given the circumstances.

Now, you could argue that they should simply have practised more, so that they would have known their talk by heart, like that first speaker I mentioned. The reality, however, is that not everybody is an experienced speaker yet. Plus there are the usual real-world problems like having to deal with more important issues at the wrong time, time pressure in general, and last-minute changes or invitations to events.

What could you do if you happen to end up in such a situation? Obviously, the best thing would be not having to rely on your slides (which is a good approach in any case - just think of what you would do in case the projector stops working). But unless we're talking about a TED talk, the reality is that you will simply try to do your best, given the circumstances, and that can sometimes mean that your preparation was not ideal.

In the above example, I would have made sure to arrive at the venue early to see what the setup is like and what can (and cannot) be changed. It may be possible to put the laptop on a seat in the first row, for example, so that you can still see your slides. Or maybe, if cables are not long enough, put it on a chair (or even the bottom) next to the lectern.

If you happen to organise an event, I'd urge you to check these things with your speakers in advance. In the above example, it was obvious that all 3 speakers tried to avoid having to stand behind the lectern. So if the organisers had talked to them in advance, it would have been possible to find a better setup that suited their needs better.

After all, if the speaker is comfortable and not distracted with having to work around the restrictions of the setup, they can give a better presentation for the benefit of the audience.

(Speaker photos - not the speakers mentioned in the article - by yours truly:
Eben Moglen, Jimmy Wales, Emily Bache, Marion Chapsal)

"The dreaded Lectern, again" by Dirk Haun is licensed under a Creative Commons Attribution-ShareAlike 4.0 International Licence.

Here's what others have to say about 'The dreaded Lectern, again':

[...] had already ordered a slimmer lectern, which may help alleviate some of the problems. I would still advise against standing behind it , but it sounded like it would at least give the speakers more room. Another solution we discussed was to [...] [read more]

[...] a remote control to forward your slides, period. Otherwise, you'll either be glued behind your laptop (or, worse, a lectern ) or you'll be walking back and forth between your spot on the stage and your laptop. The former makes for a rather [...] [read more]