At a recent event with three speakers, it was good to see how all three of them tried to avoid standing behind the lectern so that they could better connect with their audience. Trying to do so provided them with new challenges, though.

The (massive) lectern was standing on the left (as seen from the audience), with the slides being projected on the right, starting right next to the lectern, i.e. you couldn't really stand to the right of the lectern without obscuring parts of your slides. 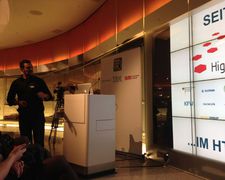 The first speaker therefore stood to the left of the lectern. That didn't work so well for two reasons. First of all, the event was recorded and he was now outside the area that the cameras were set up to capture. He was also very far away from a good portion of the audience now, and was even obscured by the lectern for some of them. After being shooed to the right, he ended up mostly standing behind the lectern, with occasional forays further right to point out things on his slides.

The second speaker tried a different approach and stood in front of the lectern. That made him more visible (to the cameras and to the audience), but he didn't have a lot of room between the lectern and the first row of the audience.

The third speaker then did stay mostly to the right of the lectern. To avoid blocking the view, he kept moving a lot in front of the slides. This worked for him since it also suited his style; it may have been more awkward for another speaker.

In search for a solution

Since the problem was so obvious, I helped trigger a discussion between the organiser and people from the venue (a technician and a manager) to find a better solution. The manager pointed out that they had already ordered a slimmer lectern, which may help alleviate some of the problems. I would still advise against standing behind it, but it sounded like it would at least give the speakers more room. Another solution we discussed was to remove the lectern entirely and go with a preview monitor in front of the speaker. That would probably be the best possible solution given the circumstances. The technician pointed out that the lectern also housed some cables and devices but it didn't sound like a deal-breaker. I'm looking forward to seeing the solution they come up with at the next incarnation of this event in about two months time.

Lessons learned: While speakers are trying to avoid standing behind a lectern (which is good), venues and organisers haven't quite caught up yet. So if you find yourself in an awkward situation like the one described above, do not hesitate to point it out to the organisers. They may not be aware of the problem and sometimes they won't be able to do anything about it this time, but they can at least take it into account for future events and make it easier for future speakers.

(Photo of the lectern in question by yours truly)

"Avoiding the Lectern" by Dirk Haun is licensed under a Creative Commons Attribution-ShareAlike 4.0 International Licence.