For my second ebook, Brainstorming Your Presentation, I was looking into the various smart pens (or digital pens) that are available on the market to see if they could help me with the problem of taking my presentation drafts with me.

I tried out quite a few of these pens - with varying degrees of success - but in the end decided to cut most of the details out of the book again, as they were distracting from the book's focus. Since the information could be of interest to potential buyers of these pens, I'd like to publish it here instead.

Basically, there are two sorts of smart pens on the market: The first type requires you to write on special paper with a microdot pattern. These pens are equipped with a camera and use the dot pattern to keep track of the pen movements. Other smart pens use a combination of sensors, usually in the pen itself and on or near the paper you're writing on (which, in this case, can be regular paper). Other features, such as OCR, voice recording, etc. vary between products and are outside of the focus of these short reviews. 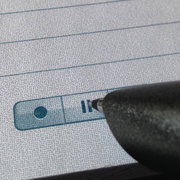 Several versions of the Livescribe pens have been on the market since 2008. Like all smart pens, you use these just like a regular pen to take your notes on paper, while at the same time it also digitally records what you're writing or drawing and lets you transfer your notes to a computer (either wirelessly or via USB, depending on the model).

The Livescribe pens require paper with a special microdot pattern to work. You can print the paper yourself (templates are available for download) with a laser printer and there are also sticky notes as well as versions of the popular Moleskine notebooks available with the Livescribe dot pattern. Overall, however, this requirement means that you need to have the microdot paper with you at all times. Without it, the Livescribe pen is just another regular ballpoint pen.

A unique feature that the Livescribe pens have over all the other smart pens (that I know of) is that you can go back to a page and make additions later. This is because the dot pattern on the special paper also encodes a unique ID for each page that lets the pen (and its software) identify the page again.

The Wacom Inkling is listed here as an example of a group of smart pens that try to bridge the gap between analogue and digital without the need for special paper. These pens use a receiver that you place at the top of the paper you are going to be writing on. They use a combination of infrared and ultrasonic sensors to record the pen movements, so you have to be careful not to block the space between the receiver and the pen or the sensors in the pen itself.

In practice, these types of pens require some time to set up, so they're not ideal for spontaneous note taking. The biggest problem, however, is that if you accidentally move the receiver (relative to the paper) while sketching, you will end up with a digital copy where part of the content is offset from what you wrote earlier, whereas the paper copy looks perfectly fine.

The Wacom Inkling itself is no longer on sale (but still popular on eBay). Pens using similar technology are available from other manufacturers. 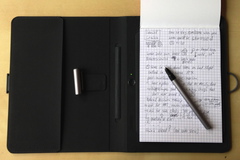 With the Wacom Bamboo Spark, the company is having another go at trying to bridge the gap between analogue and digital. Unlike the Inkling, this product uses an EMR (electro-magnetic resonance) board. It's built into a fold-up cover that holds a regular A5-sized writing pad and a pen.

By securing the writing pad within the cover, the Bamboo Spark solves the problem of accidentally moving the paper relative to the sensors. The ballpoint pen that comes with it is not an active component (unlike the Inkling's pen), but recording the pen strokes only works with this specific pen.

The resulting sketches or notes can be transferred off of the Bamboo Spark to a mobile device via Bluetooth. Oddly, only apps for iOS and Android are available, but no accompanying desktop app. The sketches can be exported into JPEG (not the best format for line drawings, actually), PDF, and Wacom's proprietory WILL vector format. Additional options are available when you sign up for Wacom's cloud service, which is "currently" free.

Wacom claims the device can distinguish up to 1024 levels of pressure with the pen, but I found that it sometimes doesn't record some of my lighter or more hurried strokes. The export options are somewhat limited - a non-lossy image format such as PNG and a standard vector format such as SVG would be welcome additions. The decision not to offer a desktop software seems odd and is probably meant to nudge users to sign up for the cloud service. If you don't want to do that, the free Bamboo Paper app can read the WILL format and allows some simple processing, such as colourisation and an eraser.

In practice, the Wacom Bamboo Spark works quite well, e.g for sketchnoting. It doesn't require a lot of setup (open the cover, switch on the device, and you're ready to go) and provides reasonable accuracy.

Other Pens And Recent Developments

Interestingly, Moleskine just came out with its own smart pen. Or rather, it appears to be a rebranded version of the Neo smart pen. For a maker of paper notebooks, this step is not entirely unexpected, but it does make you wonder how long they're going to be supporting the Livescribe pens, now that they are in direct competition with a product that uses pretty much the same technology (a camera built into the pen's tip).

At CES 2016, German pen maker Stabilo showed off the Digipen, a prototype of a new smart pen that does not require any external sensors; everything's built into the pen itself. On further enquiry, they had to admit that it does not currently keep track of the pen's position on the paper, though. Its main purpose at this point is to translate your hand writing into text. It does show, however, that smart pen technology is developing and moving forward all the time. It will be interesting to see what will be possible in a few years.

The Verdict On Smart Pens

The idea of having your handwritten notes available in an electronic format pretty much instantly is attractive. The available technology doesn't quite live up to this promise yet, though.

My personal favourites at this point are the Livescribe pens, which have been on the market for quite a while yet, and the Wacom Bamboo Spark, which to me is currently the most usable smart pen that does not require special paper.

As with all technology products, all of the above can change at any time and even seemingly established companies can go out of business unexpectedly. Which makes the aspect of longevity so important: Will you still be able to get the ink or special paper when the company folds? Will the software still work? In that respect, good old pen and paper are hard to beat ...

(Brainstorming Your Presentation has an entire chapter devoted to the problem of taking your drafts with you and discusses various option, analogue and digital, including a shortened version of the above discussion of smart pens. All photos by yours truly.)

"Smart Pens And Their Use For Brainstorming" by Dirk Haun is licensed under a Creative Commons Attribution-ShareAlike 4.0 International Licence.

Great post Dirk. Do you know if any of the pens utilizing microdot paper are interchangeable with other brands' paper? For instance, can the Neo Pen use Livescribe paper, and can Livescribe's latest LS3 use Neo's microdot paper?
[ Reply to This | # ]

As far as I know, the microdots papers are not interchangeable between brands. Livescribe in particular has, to my knowledge, not licensed their technology to anyone, so other brands have to re-invent the wheel (which Neo did).