Since I just discussed rehearsing too much: Hans Rosling is a speaker who is known to rehearse thoroughly. But even he is not immune to technical problems.

At TED Salon Berlin, the first official TED event in Germany, he was one of the most famous people on the list of speakers, so the audience waited for him with some anticipation. And then, only a few seconds into his talk, he ran into technical problems.

The audience had been given small electronic voting devices specifically for this talk. Hans was about to give us the first of three questions which we were supposed to vote on, when something went wrong. The audience couldn't see what the problem was, but apparently it was a big one.

Now, what I would normally recommend in such a situation is to acknowledge the problem, give it a quick second try and if it still doesn't work, switch to your plan B. 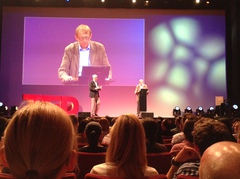 Only, apparently, Hans didn't really have a plan B. Or at least he was unwilling to give up on this specific part of his talk. What happened then was exactly what I would expect: The audience was sympathetic at first (even more so with such a famous and beloved speaker) but that didn't last long and the smartphones came out; in this case, mostly to tweet about the unfolding drama (as I did, admittedly). With a less famous speaker or a talk where people aren't so excited about the topic to begin with, you would risk losing the audience entirely at that point. They may find something more interesting on their phones and never "come back" to your talk.

Hans, of course, had a bonus here. As soon as the technical difficulties were resolved, the audience turned their attention back to him; and it was worth the extra wait. It was the kind of entertaining and insightful talk that you would expect from one of the most famous TED speakers (with some support from his son Ola, in this case).

On a side note: It will be interesting to see if anything from that technical problem will be in the video of the talk. As Hans was about to continue, the host reminded him about the video and suggested that he'd start from the beginning. Which Hans did, but rather hurriedly. If they take that bit as the opening of his talk, it will look odd for anyone who wasn't there.

Update: The talk finally went online a full 11 weeks after the event - and they went with the hurried introduction.

I had the chance for a quick chat with Hans Rosling later that evening. Since I couldn't think of an intelligent question to ask, I only thanked him for the interesting talk, "despite the minor technical problems". To which he admitted that it had indeed been a major problem. He got some help on stage from a technician who suggested to simply skip the interactive part, but Hans insisted on going through those questions and, from what I understand, his laptop had pretty much crashed at that point and needed to be restarted.

Doing that, live on the stage, in front of an audience of 1400 people and at such a prestigious event, requires some courage. I think it was the right thing to do in this specific situation, though. Not only because he's Hans Rosling but also because it happened literally at the start of his talk. Still, I think having a plan B would have been a good idea; even if it's only an idea of how to entertain the audience during the unplanned break.

Lesson for those of us who are not Hans Rosling: Always consider what could go wrong - and have a Plan B.

(photo by yours truly)