I attended a technical presentation recently. It was intended to give an overview of a certain technology. To my delight, the speaker used an approach that I usually suggest to people for this kind of talk: For the part of the presentation where he explained the background and the benefits of the technology in question, he was using full-screen photos. When he came to actually showing what it can do, he did short demos, showed code and, yes, even used some bullet points appropriately (to list features and data). So, a good example of a modern technical presentation?

At first glance, yes. But the selection of photos bothered me.

One of the first images that came up showed one of the Mars rovers. He had chosen this illustration to talk about APIs, i.e. programming interfaces for the technology. Now, I know what an API is but it took me until the next morning(!) to figure out that he had probably chosen this picture to illustrate the idea of remotely controlling something. That's one of the aspects of an API, sure, but he didn't talk too much about this specific aspect and so the connection with the image didn't work.

When talking about the costs of the technology, he put up a photo of a pocket calculator with some coins (small change) next to it. That may not be the most original idea to illustrate cost, but it was appropriate, since the technology in question does cost small amounts of money per usage or per time, so you can start cheap but have to calculate your actual costs. What bothered me about this particular picture was that the coins were clearly not Euro coins (as you would expect for a talk by a German in Germany); they were actually Pennies, i.e. British money. 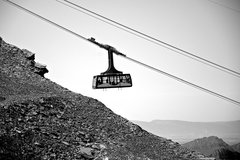 The most glaring choice of a wrong photo, however, was for when he talked about scaling the technology. A common problem in technology is that something might work on a small scale, e.g. for only a few customers, but may not work as well - or at all - any more when you have a lot of customers. While you can scale things down, "scaling" is mostly referred to when the problem is to scale something up. So "Scaling" equals "Up", as it also did in the context of this talk. Yet he used the photo you can also see here, of a gondola of a cable car going down the mountain (the image is static, but we read from left to right, so that gondola is going down in the minds of most people).

Visuals are an important tool to use in a presentation, because they work. But they only work when they are connected with the idea you're talking about. They are meant to support your point and help your audience remember it. If the audience is too busy figuring out what the visuals are supposed to mean or, worse, when they even show the opposite of what you're talking about, then they are not helping; they are a distraction, taking the attention away from your topic. That's quite definitely not what you want.

So pick your visuals carefully.

"Why picking the right visuals is important" by Dirk Haun is licensed under a Creative Commons Attribution-ShareAlike 4.0 International Licence.