Meetings tend to always have the same length - an hour, usually. But is there a reason for this, other than tradition and the default setting in organiser software? Why not schedule a meeting to only take 22 minutes? It's the same with presentations. Why do they have to take an hour? Why not 15 minutes including Q&A?

When you are asked to give a presentation, have you considered a format other than the usual hour? How long do you really need to cover your topic? Don't feel obliged to fill an hour when it would only take you 20 minutes to discuss your main point. Adding content that's not strictly relevant - just so that you can fill a timeslot - won't make your presentation any better or more memorable; quite the contrary actually.

So far, so good 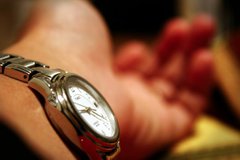 This approach may work for a "stand-alone" presentation; but what if you're going to present at a conference? There, you will usually be given a slot of a fixed length and asked to fill it. If you've been given an hour, what would happen if your presentation took only 30 minutes?

There's good advice that if you've been given an hour to present, you should plan on using only 45 minutes for your presentation and leave the rest for discussion. That way, even if there are no questions, the audience will not feel like they've been cheated; chances are, they feel satisfied instead of feeling overwhelmed (the hara hachi bu principle).

But how short can you go? When the audience expects a one-hour presentation, giving them only 30 minutes (or less) will surely reflect badly on you. So you need to manage the audience's expectations. Make it clear that it's going to be a short presentation, followed by audience interaction. Or build the interaction right into your talk, e.g. by asking the audience to discuss a point you just raised or exchange similar experiences in groups. But always keep in mind that the audience also needs to get something out of this interaction - don't just add an activity to fill time.

Of course, all of these tips are still only workarounds - you've been given a fixed-length slot and are trying to fill it. Wouldn't it be nice if conference schedules were more flexible?

The TED and TEDx formats are good examples. They start with the (famous and somewhat arbitrary) restriction of 18 minutes per talk, but also allow for even shorter presentations. So when you sit down to listen to a TED talk, you know it won't be any longer than 18 minutes, but it may well be much shorter. Once it's over, the next talk will start immediately.

So this approach works if you only have one track. Bigger conferences usually have several presentations running in parallel. There, the schedule with its fixed one-hour slots also lets people switch between tracks after each session. If sessions had arbitrary lengths, they wouldn't be able to do that easily.

I'm just thinking out loud here, but what I imagine could work is to build in "synchronisation points" after a certain amount of sessions. So track 1 could have two longer presentations while there a three or four shorter ones in the parallel track 2. Then you have a break in both, so people can switch tracks.

From a visitor's point of view: Who says you have to sit through presentations all day? If you're only interested in one of the three talks in a track, visit just that and skip the others. Instead, use the time to network. The organisation could encourage this and provide meeting areas where people not listening to a talk could network instead.

A somewhat related conference culture is fostered at BarCamps: People are actually encouraged to leave a session if it turns out not to be of interest to them. Of course, a BarCamp session is not the same as a regular presentation. Instead of a speaker and his or her audience, you have the person who initiated the session (and who usually kicks it off) and the audience is encouraged to participate by sharing their experiences and opinions. With a dynamic setup like this, a session can easily take a different turn than originally planned, so it's understandable if people leave when it turns out not to be what they expected. The point is that this is perfectly acceptable and nobody, including the session chair, will be offended. And what do you do if you leave a BarCamp session halfway through? You join another session - or network.

I'm not aware of any conferences that are using a flexible schedule as described above, but I'd be interested to see if and how such an approach would work. Would you go to such a conference? What's more important to you when you attend a conference - the talks or meeting other people?

(Image Credits: "Not enough time" by Caitlin Regan and "What time is it?" by Jon Nicholls, from Flickr)

"Have you considered making it shorter?" by Dirk Haun is licensed under a Creative Commons Attribution-ShareAlike 4.0 International Licence.

Here's what others have to say about 'Have you considered making it shorter?':

[...] would be enough for any business presentation - including the time for questions. Some conferences are already experimenting with shorter formats, e.g. 30-minute talks or lightning talks (which are usually about 5 minutes, with a hard limit). [...] [read more]

Have you considered making it shorter? | 2 comments | Create New Account

End of March we will have our annual customer event. During this event customers, 3rd party partners and employees will present. For this year, we have decided to shorten the time slots for presentations to 30 minutes, including interaction, back from 45 minutes. For some roundtable sessions we have reserved longer time slots, so there's a kind of flexible schedule, although not the same as described by you.

Reasons for having shorter slots is to challenge the presenter to think of a more compelling message by providing time constraints. We have to see how it works out.

Sounds good. Marketing presentations especially could benefit from a more compact format: Just tell us what's so great about your product or service and if we're interested, we come talk to you about the details anyway.