For me, Post-it notes are an important part of the preparation phase of a presentation. They're great for brainstorming and can serve as early versions of slides. Right now, I am working on a presentation that I'm about to give soon and all I have at this point is a collection of Post-it notes stuck to my whiteboard. But that's all I need to practise this talk!

Once I'm happy with the content and comfortable with the flow, I'm going to sit down at my computer and create the slides. There will probably be fewer slides than the number of Post-its I have right now; some Post-its are early versions of slides, others are simply notes.

But do you always have to use Post-its? Are there any alternative products you could use? I've mentioned software solutions before - mind mapping tools and the free Post-it app. But this is about "analogue" alternatives: Tangible things you can write on with a pen. What alternatives are there? 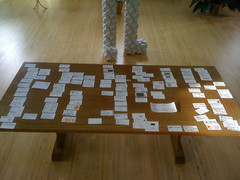 A simple alternative would be index cards. Or even a sheet of paper that you cut into smaller pieces. They won't stick to a wall, obviously, but you can put them on a table and move them around as your presentation develops. Just make sure there's no sudden wind ...

Simply noting down things on a piece of paper works for the initial brainstorming phase; you want to note down things as they come up. Don't worry about sorting them right away. But after that step, you can't reorder or insert items and would end up having to transfer them to another piece of paper when you develop the structure. The rearranging and clustering is really where Post-its are the most useful.

There's another product, actually, that is very similar to Post-its. While Post-its are sticky, i.e. they use an adhesive that can be removed without leaving traces behind, the alternative product, called Stattys, uses electrostatic charge.

You remember electrostatic charge from your childhood and school experiments, don't you? Where you rub a balloon against your pullover so that it's charged and can pick up light objects, like pieces of paper or attract somebody's hair. 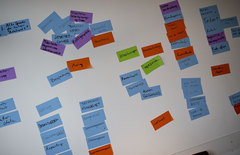 Stattys are thin sheets of plastic that have been charged electrostatically. As a result, they will stick to pretty much any surface. You can move them around easily on a smooth surface (unlike a Post-it, which you have to pick up and re-attach). Just like Post-its, they are available in various sizes and colours. There are even big sheets available which you can stick to a wall and use as a replacement for a flip chart.

The main attraction of Stattys is the ability to easily move them around and stick them to pretty much any surface effortlessly, made possible by the electrostatic charge. They do come with a few downsides, though.

The fact that they are plastic is not really a problem; they can be recycled. But you can't just use any pen to write on them. Whiteboard markers and many flip chart pens will smear. You need water-resistant pens.

While you can remove Stattys from any surface easily without leaving any traces, they do tend to attract dust (due to the electrostatic charge). If you leave them hanging for a longer period of time and then remove them, you may find that dust has assembled around them (a bit like removing a picture frame from a wall after it has been in that same place for years). Depending on the surface, removing that dust could be a problem.

Stattys also lose their charge with extended use. So if you pick them up and re-place them a lot, you'll notice that they no longer stick as well as they did originally. But then again, the same is true for Post-its.

So which product is "better"? Both have their uses. I tend to use small Post-its but that's because it's usually only me working on a presentation that way. I found that using the bigger Stattys when doing brainstorming in a group works quite well - they are easy to see and read for everyone that way and they are easier to handle than the bigger Post-its (which tend to roll up, since they only stick on one edge whereas the Stattys with their electrostatic charge will stick to the surface equally well over the entire area).

But in the end, these are all tools and it doesn't matter so much which tool you're using but that you do a proper brainstorming and think about your presentation before you start producing slides.

"Alternatives to Post-its" by Dirk Haun is licensed under a Creative Commons Attribution-ShareAlike 4.0 International Licence.