The Mystery of Picasso is a 1956 movie that lets us watch Picasso painting. Nothing else - it's not a documentary in the usual sense, it's really only showing how one of the most popular and influential painters of the 20th century works. Which makes for a fascinating film.

During the 78 minutes of the film, we can see Picasso working on a wide variety of paintings - from very abstract to more realistic ones. He's also using various different techniques. But there's a common theme: 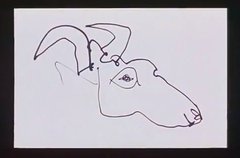 All the paintings start with an outline - mostly just drawings but sometimes also broad strokes with a brush. Some of the paintings change very little after the initial outline - he's just tweaking details or adding colour. In other cases, the painting is going through an enormous amount of changes until Picasso arrives at something he's happy with.

The almost dramatic end of the movie is when we see him working on a beach scene. It starts as a sort of light, almost naive, cartoon-ish drawing (for some reason, it makes me think it would be the perfect backdrop for a Monsieur Hulot movie). But Picasso seems unhappy with it and keeps changing things over and over, sometimes only details, sometimes making more drastic changes. Then, night falls over the beach scene and we hear the painter declaring that it's going badly. He makes some more drastic changes before finally declaring that he's found what he's looking for - but that he needs to start over on a fresh canvas. And with just a few strokes, he then paints a new, light and mostly abstract beach scene, in which we can still find some of the elements that he had been struggling with in the previous version.

What does all this have to do with presentations? Picasso's way of working does have some things in common with the way presentations are created. 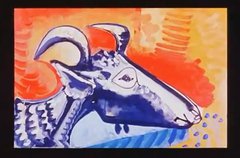 You start with an outline. You have certain images in your head and now you try to turn them into slides. When the presentation starts taking shape, you notice that some things don't work out as well as you thought they would, so you're tweaking the flow of the presentation or the content of the slides. Usually, though, the end result will not be too far away from what you had in mind originally.

But sometimes, just like with that beach scene, things just don't work out at all. You're constantly changing and tweaking things but it doesn't seem to be getting better. In such a situation, it helps to take a step back and start over fresh. Keep the elements that have survived all the tweaking but put them into a new context.

This, of course, isn't anything radically new (or anything specific to art or presenting). It simply shows that creating a presentation is an iterative process. Still, I think the parallels are worth being pointed out:

You can see a trailer for the movie on YouTube:

(Photos are stills from the trailer.)

"From Outline to Completion - Learning from Picasso" by Dirk Haun is licensed under a Creative Commons Attribution-ShareAlike 4.0 International Licence.

Here's what others have to say about 'From Outline to Completion - Learning from Picasso':

[...] them - what do you need to cover first, what comes next? Soon, an early draft version of your presentation will emerge - complete with first rough ideas for visuals. I find that this is a good point to start rehearsing these emerging parts of [...] [read more]