With the advent of mobile phones and tablets, I see this happening more and more: People taking photos of the slides during a presentation.

Why do they do that? And is that a good thing or a bad thing? 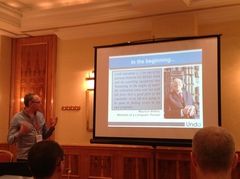 And then there's people like me, who take photos of slides as examples - good or bad - since they teach others about presenting. But we are probably a minority in your audience.

I have a suspicion that the majority of people who take photos of slides during a presentation do so as a replacement for taking notes. Another aspect is a certain feeling of guilt with regards to the topic: It gives them the feeling that they're doing something about it.

What I mean by this: At conferences, the slides are usually made available afterwards. But that can often take several days, if not weeks, and I think some people in the audience feel that a) the need to have the information available pretty much immediately and b) know that they probably won't really look at the slides once they're available.

It's a sign of our fast-moving times: We are aware of the importance of the topic right now, during the presentation. When the slides become available, next week or so, however, we are already busy with something else. We may actually download the slides, but we never really look at them; they just end up sitting on our hard drive somewhere.

Taking photos gives us the slides now. And even when we don't look at those photos ever again, it at least gives us the illusion that we did something about the topic of the talk (after all, there's a reason why we attended this specific presentation in the first place).

Assuming your slides are not snapped as bad examples, I don't think there's much you, as a speaker, can - or should! - do about people photographing them. You can try and proactively upload your slides somewhere, so that you can tell your audience where to get them during the talk (near the beginning, so they know they don't have to take photos). That still won't stop some people and, again, it's not something that you should try and suppress.

As a member of the audience, I only like to apply to my fellow attendees: If you take photos, please try to do it discreetly and in a way such that you don't block other people's view. Thank you.

"Why are People Taking Photos of Your Slides?" by Dirk Haun is licensed under a Creative Commons Attribution-ShareAlike 4.0 International Licence.

Here's what others have to say about 'Why are People Taking Photos of Your Slides?':

[...] I usually try to entertain myself by making mental notes of all the mistakes the presenter makes (and take photos of the slides for my collection). But, to be honest, it's more frustrating than amusing; there are so many simple things that [...] [read more]

Why are People Taking Photos of Your Slides? | 0 comments | Create New Account