Imposing restrictions can often make things more interesting. When it comes to presentations, one such example is Pecha Kucha. The idea behind this format is that a speaker only gets to show 20 slides - and that the slides are moving forward automatically after 20 seconds. So all in all, you have 6:40 minutes for your entire presentation.

I've read about Pecha Kucha but hadn't seen it live until a few weeks ago, when I attended a Pecha Kucha night in Stuttgart. It was very interesting to see how the 10 speakers dealt with the restrictions.

Some speakers decided to ignore the restrictions and simply showed 20 slides with photos while talking about their topic - but without their talk being synchronised with the slides. I found this somewhat disappointing. In general, your message is of course more important than the form, so there's nothing wrong with ignoring what everybody else is doing - if it helps with your message. In this case, however, the entire point of the evening was the format, so ignoring it felt like the speaker was cheating.

This approach also didn't work too well for those speakers. One speaker in particular was so out of sync with his photos that he talked about some issue and a few minutes later, a photo appeared that would have made the perfect backdrop for this earlier part of his talk. There was also a photo that caused the audience to laugh and the speaker then had to interrupt himself and figure out what they were laughing about. By ignoring the format, he came across as unorganised. 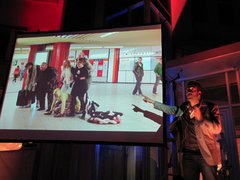 Most of the speakers did stick to the format, though. As expected, the outcome differed widely. Some of them did a good job, others got completely lost and even gave up at some point: Uhm, okay, ... Any questions? This all happened in a friendly and light-hearted mood, mind you. The audience was familiar with the format and certainly wasn't there to see the speakers fail.

What I also found surprising was that two speakers didn't even use their own slides (one of them had agreed to stand in for a colleague at the last minute). Other speakers discovered that even 20 seconds can be very long - and wondered (aloud) why the slides didn't move forward.

Here's what I took away from this evening:

Overall, I did enjoy this evening very much. If there's a Peach Kucha event in your area, I recommend that you attend it. It's both entertaining and instructive. I posted more photos from this event over on Google+.

"Lessons from a Pecha Kucha night" by Dirk Haun is licensed under a Creative Commons Attribution-ShareAlike 4.0 International Licence.

Here's what others have to say about 'Lessons from a Pecha Kucha night':

[...] at some of the more famous formats, you'll notice that they are often very short. TED talks are 18 minutes max. Pecha Kucha has an even more strict limit of 6:40 minutes. These restrictions make it more of an art to make your point within [...] [read more]

[...] they always do. This explains why formats with very strict constraints - TED and TEDx with their 18-minute rule, Pecha Kucha with its 20x20 format, or pitching competitions where you have 3 minutes and no slides - often result in great talks. [...] [read more]