A laser pointer seems like a useful tool for a speaker. You can use it to point out certain aspects or details in your slides, even if you're far away from the projected screen. It can, however, also be very annoying for your audience. 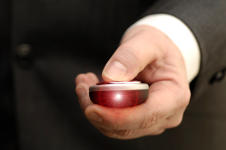 I've seen this on more than one occasion: A speaker was doing fine in his presentation, up to the point where he wanted to draw attention to some detail on a slide. Out comes the laser pointer. Now, there's nothing wrong with this so far - that's what laser pointers are for after all. But for some reason, the use of laser pointers seems to be addictive: Once the presenter has started using the laser pointer, he will continue to use it from then on, even when it isn't necessary. This usually manifests itself in furious waving about and underlining of the passages the speaker is currently talking about.

For the audience, this is really irritating. The little red dot adds a movement to the slide that involuntarily draws attention to it. And since it's hard to see in the first place, it requires a lot of their attention to keep up with. That attention, however, is drawn away from the presenter and from what he's talking about.

A laser pointer has its uses, but it should really only be used sparingly. Point something out if you must, then switch it off again. Actually, if you find that you need to point things out often, it may be an indication that your slides could be made clearer. Try to identify those points and see if they require their own slides, which would automatically draw attention to it - no laser pointer required.

Another aspect that comes into play here, I guess, is that people have been told not to obscure their slides and ensure the audience can see and read them at all times. So a laser pointer is a way to interact with your slides while being far away from them. However, there is nothing wrong with going up to your slides and pointing out things with your hands. You don't have to go all Hans Rosling style, but it adds a bit of interaction to your talk and makes it a little clearer that you and your slides are not separate entities.

(This article is based on a piece that I originally wrote for the Presenting for Geeks book but that didn't make the cut. Photo: Laser pointer, iStockphoto file #2699367)

"Put away that Laser Pointer" by Dirk Haun is licensed under a Creative Commons Attribution-ShareAlike 4.0 International Licence.

Here's what others have to say about 'Put away that Laser Pointer':

[...] to point something out is in such a setup. Either try to switch sides or maybe look into technical solutions ( laser pointers don't count - you're still going to turn your back to a part of your audience). What I mean is that you could try [...] [read more]