It's about time to start using Keynote on the iPad, so I defined two simple tasks:

So let's assume for a moment that the presentation that I suggested for FrOSCon would have been accepted and I wanted to create a first draft on the iPad. Let's start with 3 simple slides: 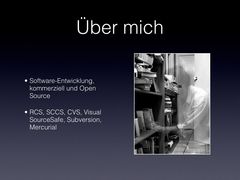 Well, that's easy enough: Create a new presentation (I picked the "Gradient" theme) and it already creates a title slide. All I have to do is enter a title and sub title and select a photo, e.g. from the Photos app. No problems there. For the second slide, I had a certain photo in mind for the illustration. Flickr was a bit slow when I went to download that photo, but that didn't seem to be a problem with the iPad (other websites were loading quickly, so it wasn't the dreaded WiFi issue that some iPads are experiencing). Positioning the photo was a bit fiddly but not really a problem.

The third slide was even easier - just type in the text for the items. I wanted to indent one of the bullet points. Turns out there are two ways to do it: You can tap on the "info" icon for the line and indent it from there. Or you can select the entire item and indent it by dragging. The latter option turned out to be slightly awkward as the keyboard got in the way and slid in and out of view while I was dragging the item around. I did manage to indent the line eventually, though. 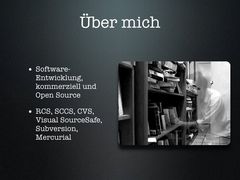 Now for something more challenging: As mentioned elsewhere, the "Storyboard" theme is my preferred theme for presentations. But it's not available on the iPad. Still, during my first experiments I managed to import a presentation that uses the Storyboard theme. That presentation had an issue with a special font that I was using on some slides. But the slides that used the standard theme font were showing up just fine. So how about using slides from that presentation to create a new one? Would that work?

I briefly considered duplicating the other presentation and then editing the duplicate. But for only 3 slides, it turned out to be easier to copy over the 3 slides separately. So I created a new presentation (I chose "Black" but it didn't really matter since I wasn't going to use anything from that theme anyway). And then, by going back and forth between the two presentations, I copied over 3 select slides from my Storyboard-themed presentation into the new one. Discarded the one (automatically created) slide from the Black theme and I ended up with a new presentation that used my beloved Storyboard theme. Excellent.

This method needs some refinement, obviously. But then again it was only a first experiment. So I guess I'm going to create an empty Storyboard presentation with Keynote on the Mac and transfer it over to the iPad. There, I can then simply duplicate it whenever I want to create a new presentation. Duplicate and remove slides as needed - simple as that.

Some things I noticed while performing this experiment:

I'm mostly happy with the iPad's virtual keyboard. I am not a touch typist - I've developed my own system where I usually use about 5 fingers without looking at the keyboard. As a programmer, you need just too many special key combinations, for which the classic 10 finger touch typing system wasn't really made for. On the iPad, I seem to lean towards using 2 fingers most of the time and 3 occasionally. I'm getting a good speed with that so far. The only thing slowing me down are the German umlauts. For an "ü", for example, you have to hold down the "u" key for a moment until a selection of accented "u" letters appears.

Another thing I have to look up is how the word completion is supposed to work. I never had an iPhone, so this is all new to me. So what do I do when the word completion suggestion pops up and I want to accept it? Tap on it? Tap on the word? So far, I've only managed to make it go away. But that's my problem and not something in Keynote.

So far, given that this was a simple example, things are looking good regarding creating presentations on the iPad. We'll see how that works for more complex ones.

Next up: Displaying those presentations on an external monitor via the VGA adapter. Stay tuned ...

Here's what others have to say about 'First presentation experiments with Keynote':

[...] workaround: My preferred Keynote theme (on the Mac) is Storyboard. It's not available in Keynote on the iPad but works nicely with existing presentations copied over from the Mac. So the idea is simple: Create an empty presentation with your [...] [read more]

Okay, I should have Read The Fine iPad Manual first. Turns out there is a caps lock option - but it's off by default and has to be enabled in the Settings first.

My mistake in trying to make sense of the auto-completion was that I tried tapping on the word I was typing or the word that was suggested. But that would mean that to use the word completion you would have to take your hands off of the keyboard (so to speak), which wouldn't be very efficient. I simply couldn't think of a key to tap to accept the suggested word. Turns out you can use the space bar, a punctuation character or the Return key, whatever's the most appropriate for your situation. My mistake for thinking it was something complicated :)