It was a bit sad to see the usual prejudice about the abilities (or inabilities) of people in the public sector being confirmed. I attended an information session about the city's participatory budget recently. I'm going to document the progression of the session below, pointing out the problems and suggest what could have been done better. See if any of this seems familiar (to you or to sessions you attended).

Upon entering the room, a Windows desktop greeted us from the screen - and stayed there during the welcome and introduction. Fortunately, it wasn't someone's private laptop, so while we amused ourselves with trying to read the titles of the visible documents and icons, at least nothing embarrassing showed up.

Suggested improvements: Show a welcome slide with the topic. At the very least something that looks official, like the city's logo.

Next up was a video, explaining how the participatory budget was going to work. The video was in a separate file and the person using the laptop needed several attempts to get it to run - only to discover that the sound didn't work. They hastily held one of the microphones close to the laptop's speaker. At which point they discovered that the microphones weren't set up very loud to begin with (it wasn't a very big room, so people could still hear the city officials as they spoke, but it wasn't enough for the video's sound).

Suggested improvements: Test the sound setup before you begin. Remember that sound from your laptop will not magically come out of the speakers in the room. Embed the video in your presentation, so you don't have to switch apps. 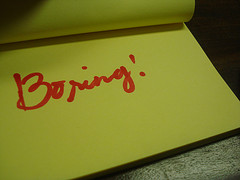 After that, we were treated to a reading of a slide deck. Most of the slides were really just read out, even if they only contained half-sentences.

Suggested improvements: I realise the person reading the slides probably didn't create them, so I'm not blaming them for the slides as such. But at least make an effort to speak to your audience in complete sentences, please. Or if you've just read a list of items, summarise what it all means in a sentence or two (the city official did actually do that on a few of the slides - I can only assume that she was more familiar with those topics than with the others).

For arguments against bullet points, please see pretty much the rest of this blog ...

A Q&A followed, but mostly focused on formalities in the procedure. One of the other members of the panel did try his best to encourage people to participate, quoting and explaining examples from the last budget. Interestingly, he turned out to be a volunteer, which explains why he showed much more enthusiasm.

I'm terribly sorry having to feed the stereotype, but this was such an obvious example of how not to engage an audience, despite all the best intentions. Never mind the technical difficulties; the people on the panel weren't opposed to the concept of a participatory budget, but (with one exception) they didn't exactly show enthusiasm either or tried to really encourage the audience to participate. I wonder if the session would have been better if the volunteer would have been in charge.

(Image Credits: Boring! by Leyram Odacrem, CC BY, from Flickr)

"How Not to Engage an Audience - A Case Study" by Dirk Haun is licensed under a Creative Commons Attribution-ShareAlike 4.0 International Licence.