I recently attended an event, an evening consisting of a series of short talks. Afterwards, it occurred to me that what I've seen could have been representative of the future of presentations, i.e. the average talk we're going to see in the future. And I have to say, the outlook isn't pretty.

On paper, the programme read a bit like a TEDx event: 12 short talks on a range of topics like innovation, management, motivation, health, etc. Content-wise, what we did get, however, were effectively 11 variations of a "you can do it!" talk plus one mildly entertaining one about sex.

From a presentation point of view, it wasn't a bad event. There were surprisingly few slides overall and even fewer bullet points (thankfully). Instead, a lot of the speakers spoke freely, some used flip charts, brought props, and used audience interaction. So they mostly did the things I'm trying to teach people all the time. Yet there was still a lot to criticise.

For example, two of the speakers overdid it with the "raise your hand if you ..." audience interaction. In particular, they did it so often and with such speed that they didn't really take their time to acknowledge the audience reactions. Other speakers used the same tool, albeit less frequently, which overall resulted in the audience growing weary of it. As the evening went on, a lot of people didn't bother raising their hands any more when yet another speaker tried his or her variation of this - by now very tired - interaction.

I also noticed a lot of messages and "points to take home" that came in packages of threes whereas things on the flip chart tended to be presented in fours, mostly in quadrants.

Two speakers made heavy use of props. Some of them worked, but most, unfortunately, didn't. I liked the wooden frame that was used in one talk to demonstrate the limited amount of space that people had during the unfortunate events at the last Loveparade (which left 21 people dead). The speaker asked 15 people from the audience to try and get inside that frame at the same time - which turned out to be impossible.

One speaker in particular overdid it with the props. He started with a nice demonstration of "focus" by showing that if you apply the same amount of force to a piece of wood, focus can make all the difference: A hammer won't do the block of wood any harm, but an axe will split it. It went downhill from there, when the talk, ironically, lost its focus as more and more props appeared. Changing from sneakers to moccasins, for example, wasn't really necessary to support the old adage, "walk a mile in my shoes". The speaker also spent an increasing amount of time picking up his props from behind the decoration (while he kept on talking), causing the talk to pretty much fall apart.

My point here is that it doesn't automatically make your talk better when you replace slides full of text and bullet points with props and audience interaction. You still have to focus (hah!) on your message and make it clear and understandable for the audience.

Is this The Future of Presentations?

What I fear somewhat after this evening is a new wave of "copying what everybody else is doing". When speakers aren't told how to make a good presentation, they copy what they see other speakers do. In the past, they copied slides full of bullet points since everybody else was doing it. Now they copy audience interaction ("raise your hand if ...") and bring props - but mostly for show, not to make their point.

The audience on that evening seemed to enjoy it (despite some exhaustion from too much arm raising), which I can understand. After all, these 12 talks were different from the "Death by PowerPoint" snooze fests that they probably still have to sit through at work all the time. Plus, despite what my above criticism may make it sound like, some of the talks were pretty good and 2 or 3 of them did have the right mixture of entertainment and insight. 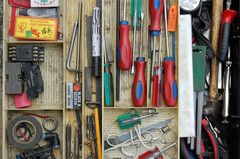 The not-so-great talks, however, provided an outlook into a future where speakers try to replace slides and bullet points with other means, yet they still haven't grasped what makes a good talk. Just like PowerPoint is a tool, props and audience interaction are tools. You can use them for your presentation but you don't have to. Tools can be used in the wrong way - and again, PowerPoint is a prime example of a tool that is often used in the wrong way.

Slides or props or audience interaction alone don't make a good talk. They are only tools that you can use for support. The most important factors for a good talk are still to have a clear message, a story, and to always keep the audience in mind in everything you do up on that stage.

(Image credits: img_5336.jpg by Daniel Hackney (CC BY-SA),
Inside a ToolBox by Alvin Chua (CC BY), both from Flickr)

"Maybe the Future (of Presentations) isn't so bright" by Dirk Haun is licensed under a Creative Commons Attribution-ShareAlike 4.0 International Licence.