When you look at the available literature about presenting, you'll notice a certain kind of books and articles promising to reveal the "secrets" of the most prominent or successful speakers. Inevitably, Steve Jobs is usually amongst the names.

But should you really try to be like one of those famous speakers?

The answer, I would hope, is pretty clear: No, you shouldn't. You will never be like Steve Jobs (to use that example). What made him special is a unique combination of trades and experiences (and negative sides!) that you simply can not copy; your background is different.

What you should of course do, however, is copy some of his techniques, concepts and ideas. Use him (or any other speaker you fancy) as an inspiration. Pick some aspects that you feel comfortable with and make them your own, by combining them with your own strengths and preferences.

To make this sound less like a prep talk, lets look at some examples. 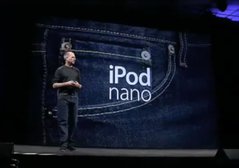 For his slides, Steve Jobs used simple, big graphics on a dark background. That's a concept that you can easily copy and make your own. The graphics in question were usually related to Apple's products, i.e. photos of their hardware or icons representing their software. You will obviously have to replace those with images that are related to the topics you talk about. But you can copy the boldness of putting up a slide that only has a simple or single image on it (and maybe a few words). By adapting the idea to your own specific situation, it will also look less like a ripoff.

In his presentations, Steve Jobs used a lot of superlatives - great, awesome, incredible, etc. There are entire videos just stringing those words together to show how many he used during a typical keynote. You may think he was exaggerating but it does come across as genuine; he really believed what he was saying.

Would that approach work for you? Probably not. But that shouldn't stop you from showing the passion you have for your topic. Unless you're in the unfortunate situation that you have been "forced" to present, you will usually be up on the stage because you care about your topic. Make sure your audience can feel that.

It should be clear by now that I'm not saying that you should try and pretend to be someone you aren't. You shouldn't be playing a role on stage; you're not an actor. You will, however, adopt a bit of a stage persona automatically. When speaking from a stage or in front of a crowd of people, it is of course a different situation than standing in a small group and talking about the same topic.

So you are, automatically and inevitably playing a role already. What I'm saying is that you should - carefully - add a bit more to that role, so that you still come across as authentic - as being you - while making it clear that this is a topic that's important to you.

The most important thing to get right is that you come across as authentic. Your audience shouldn't see much of a difference when they are talking to you off-stage. It's perfectly acceptable to be a bit more bold and outspoken when being up on stage, but when you talk to someone one-to-one, they shouldn't get the feeling that they are talking to an entirely different person; that would hurt your credibility.

How can you do all that? As usual, the answer is: practice. Try a few things, preferably in the privacy of your own room. Maybe record yourself and look at the result (as hard as that usually is). Does it still look and feel like the real you? Next, try it out in front of a friendly audience or at a low-key event. Watch the reactions, during and after your talk. Ask people about their impression - not so much about you, but whether they thought you were convincing.

Like many other aspects of presenting, it's an iterative process. You will have to try out and change things. It requires time and patience. But the results, i.e. being recognised as a good speaker who's convincing and genuine, will be worth it.

"Finding your own Presentation Style" by Dirk Haun is licensed under a Creative Commons Attribution-ShareAlike 4.0 International Licence.