One of the big problems for a speaker is getting good, usable feedback for your presentation. You won't get it directly from your audience after your talk - people are too polite. Would you go up to a speaker and tell him or her that the presentation sucked and that you want your hour back? No, you wouldn't. If it was that bad, you would just leave the room and forget about it.

People are willing to argue with the speaker about certain aspects of the content but they don't usually comment on the form or the overall effectiveness of the presentation (e.g. whether or not it met their expectations). The most reliable feedback, in my experience, ends up in the feedback form (electronically or on paper) that the event organisers prepared. And even then you need to motivate the audience to fill those out.

So it was interesting to see a new (to me) approach being tried out at a conference that I attended recently: Feedback by coaster. 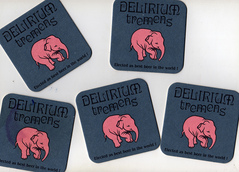 The idea was simple: After the talk, when the audience left the room, they would find two sorts of coasters next to the doors: A white one and a dark blue one. To indicate that you liked the talk, you would drop one of the white ones into a ballot box. If you saw room for improvement, you would pick one of the dark coasters, which even had room for comments on the back (the white ones didn't - they had some printed text there).

This, together with the reminders of the session chairs after each talk, certainly helped to drive the numbers of people giving feedback up. I do have my doubts about the usefulness, though.

During the event I discussed this feedback method with another participant (a regular attendee, i.e. not a speaker) and without me prodding him, he came up with most of the same points I had been wondering about:

First of all, there's a social factor here. Do you dare picking up one of the dark coasters when the people around you are all reaching for the white ones? It's a bit like others being able to see who you're voting for in an election - some people may be fine with this, while others would prefer anonymity.

Interestingly, I found myself in the opposite situation after one talk: I was the only one in line reaching for a white coaster, while everybody around me picked up a dark one. So I guess it wasn't such a big problem in practice - at least not with this specific audience (of geeks).

A bigger problem, from what I've seen, was the idea to leave feedback on the back of the dark coaster. I hardly saw people filling them out - and that includes myself. I did try leaving some feedback after one presentation, but it was akward standing there writing on the coaster and halfway through, my pen stopped working, so I had to "carve" the last words into it.

The problem here is that you are under pressure when leaving the room. You need to rush to the next talk or want to get in line for the snacks during the break or need to visit the bathroom. An alternative would be to pick up the coasters when you enter the room, so you can fill it in during the talk, but I didn't see many people do that.

The system also had another caveat: What if you don't leave the room since you want to attend the next talk in that same room, too? I'm not sure if anyone bothered to stand up and go the entrance to leave their feedback.

Also, in one case, we ran out of white coasters.

In summary, I appreciate the idea to overcome the inertia of the audience to leave feedback. I think it was working fine to get a general idea of the acceptance of a talk, i.e. it worked as a sort of thumbs up / thumbs down vote. I do have my doubts though (and I'm going to ask the organisers) that it produced a lot of usable feedback for the speakers.

You will be asked to confirm your newsletter subscription. Powered by MailChimp.
If you'd like me to talk or write about this topic, you can hire me to do so.
Please email me for details.

"Feedback by Coaster" by Dirk Haun is licensed under a Creative Commons Attribution-ShareAlike 4.0 International Licence.

Here's what others have to say about 'Feedback by Coaster':

[...] but provide space to leave (optional) comments. From a speaker's point of view, I would of course welcome getting feedback on my talk . So let your attendees rate individual talks. That's easier to do online - simply link to a feedback form [...] [read more]

Why is it considered rude to give honest feedback, yet it isn't rude to deliver a poor quality presentation? We worry over being seen to even chose a coaster but not value the audience, engage with them or deliver accessible information? Feedback is ideally creative rather than destructive and take skill and insight in itself to be helpful towards change BUT the implicit acceptance of poor presentations is actually making them worse and more acceptable.

Thank you for rasing this thouht, it deserves further discussion.
[ Reply to This | # ]