According to an article that was shared a lot recently, yet another CEO decided to ban the use of PowerPoint in his company. He's not the first CEO to have that idea and he won't be the last. But, as in all the other cases, what he does is only fighting symptoms, not causes. In other words: He's blaming the tool for being used incorrectly. 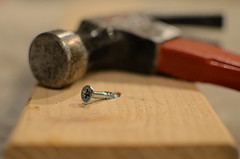 Let me explain it with a picture: Imagine your audience as a piece of wood. Imagine your message as a screw. Now imagine that you're driving the screw in with a hammer. It's obviously the wrong tool for the job. But would you blame it on the tool and forbid everybody in your company from using hammers for anything from now on?

As someone who's worked in corporate environments, I can perfectly understand where the above-mentioned CEO is coming from. The two standard ways to communicate in most corporations is through meetings and via email (and there have been similar attempts to ban email, which are equally wrong and show the same lack of understanding of the actual problem).

In a meeting, you are supposed to present a report in one form or another: What you did since the last meeting, some change that's going to happen, a summary of events or numbers, etc. PowerPoint (or any other slideware) seems like a good tool for this job: You can put the numbers or list of items up on the wall for everyone to see. And that's what most people do and that's what's wrong about the whole thing: You're putting up your notes. More often than not, these notes are unprocessed and at best somewhat clustered by topic. But that's what everybody else seems to be doing, so you do it too.

Banning a tool doesn't solve any problems. Teach people how to use the tools and when to use one tool instead of the other. More importantly, teach people more about how communication between human beings works. Then - maybe - ban PowerPoint for the next two weeks and see which new forms of communication they come up with. But don't ban it on principle and not without showing them some alternatives.

"Don't blame the tools, teach people how to use them" by Dirk Haun is licensed under a Creative Commons Attribution-ShareAlike 4.0 International Licence.

Don't blame the tools, teach people how to use them | 0 comments | Create New Account