I had the pleasure of seeing Guy Kawasaki live on stage for the first time a few days ago at the Creativity World Forum in Kortrijk, Belgium. I have read some of his books and seen recordings of some of his talks before, so it was interesting to see what, if anything, he would do differently for this talk. In that respect, I was disappointed - it was pretty much exactly what I had come to expect. But then again you have to applaud him for consistently giving talks that are a good mix of entertainment and insights.

Since he was talking to creatives and people who have to pitch their ideas, he also included a short section on how to present more effectively. In addition to his well-known 10-20-30 rule (10 slides, 20 minutes, 30 pt font), he also recommended to customise the introduction of your talk. 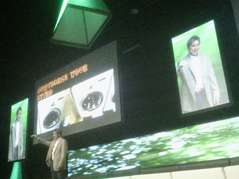 This piece of advice is an aspect of customising your talk for your specific audience that is often overlooked. You need of course to think about the content, i.e. what this specific audience expects and needs to hear from you. But in customising, or should I say: localising, your introduction, you can better connect with your audience - if you're doing it right.

Before explaining this little trick, Guy Kawasaki had of course used it at the beginning of his own talk. He had noticed a few things when arriving in Belgium and integrated them into his opening, thus providing an outsider's view. When he talked about customising the intro, he gave some more examples from previous talks, e.g. a photo of him buying a fez before a talk in Turkey or a photo of him standing next to a big canon in a city in Russia before he gave a talk there.

Even if you're not going to talk in an "exotic" place, it should be easy to find a way to include a local reference. You can use Guy's approach and take a photo of yourself in a recognisable place. You could also just as well simply integrate a reference to local food, events, habits etc. into your talk. Taking a photo specifically for customising the talk will have more impact, of course, since it shows that you took some extra effort for it. On the other hand, you have to have time for that effort (another argument for arriving early for an event).

And then there are things that you may want to avoid using as your customisation. Politics would be an obvious topic to avoid (unless you can be sure that you're only talking to people who share your views). Sports can or can not work - depending on the type and possible local rivalries between teams, for example. Or, to give a local example from where I live: If you're coming to Stuttgart, I would advise on avoiding the controversy around "Stuttgart 21", the big project to move the local train station underground.

You also have to make sure that you get your local references right. This is something that didn't quite work in Guy Kawasaki's talk, actually. On 3 or 4 occasions, he referred to Brussels. Since he had just told us to customise our talks, it was now obvious that this was his idea of integrating a local reference. The problem, however, was that he wasn't speaking in Brussels - he was speaking in Kortrijk, a town about 75 km west of Brussels. While he didn't actually refer to him being in Brussels at this point (fortunately), it would have helped to check these references with a local.

To summarise: Do customise your intro. Integrating a local reference should be easy and can be something as simple as a photo you took just before your talk. But better double-check those local references for correctness and possible controversies.

(Photo taken by my Narrative Clip at the Creativity World Forum. More photos from the event on Flickr.)

"Customise Your Intro" by Dirk Haun is licensed under a Creative Commons Attribution-ShareAlike 4.0 International Licence.