This may sound like a silly question. How can you not know which language your presentation is going to be in?

English is the language that's spoken the most at conferences (not limited to tech conferences) these days. But what about a conference in a country which does not have English as its main language? Which language would you use? Especially if you're a native of that country?

If you're only doing presentations in English in English-speaking countries then you can probably stop reading now. 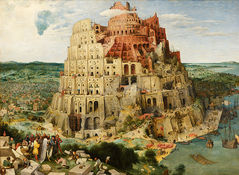 Here's what happened to me - not once, not twice, but three times:

Episode 1: A tech conference in Germany. It has always been bilingual in the sense that the speakers from Germany mostly spoke in German and the speakers from abroad mostly spoke in English. I've presented there before and always submitted - and held - my talks in German. In this instance, I did the same. I submitted a proposal (in German), it was accepted, I prepared the presentation and arrived at the venue, ready to speak. As I launched into it (introducing myself and my co-speaker, who was also clueless as to what was to come), I was interrupted by the moderator: She told me that the presentation was supposed to be in English. You can imagine my surprise, since this was really the first I heard and it came completely unexpected. There's actually a video of this in which you can watch me stumbling through the rest of the presentation. I don't have a problem doing presentations in English, but I had rehearsed this one in German, so on more than one occasion I couldn't come up with the proper English words and I botched many of the transitions where I had prepared a sentence in German which I now had to translate to English "on the fly" and which often didn't work as well.

Episode 2: A presentation at a company event. Again in Germany and again the event was bilingual. Again, nobody told me that my presentation was supposed to be in English. We even had simultaneous translators, so I had assumed that my talk would be translated. But as it turned out, we only had the translators in one room and I was to give the presentation in another, where there were no translators. Fortunately, we discovered the problem two days before the event. It was too late to switch languages, but at least we could communicate it to the attendees at the event that the talk was to be in German.

Episode 3: Yet another tech conference in Germany. I had given a presentation in English at another event and submitted the same talk for this conference - in English. It was accepted and nobody said anything about the language. I then came across a conversation on Twitter where someone asked about the language of the event. One of the organisers responded that the event was to be in German only, which made me wonder about my presentation. When asked, the organisers confirmed that my talk was supposed to be in German. This time, this all happened well in advance of the conference, so I was able to adapt.

Obviously, in all of these cases, there was a lack of communication. It would be easy to blame the organisers but there is an - at least equal - amount of responsibility on the side of the speaker. For any presentation, your audience, i.e. their needs and expectations, should come first - and that includes the language. So I'd suggest you add this to your checklist when you prepare for your talk: If it isn't absolutely clear which language the presentation is going to be in - ask.

(Image Credit: "The Tower of Babel" by Pieter Bruegel the Elder, via Wikipedia)

"Do you know which language your presentation is going to be in?" by Dirk Haun is licensed under a Creative Commons Attribution-ShareAlike 4.0 International Licence.

Here's what others have to say about 'Do you know which language your presentation is going to be in?':

[...] about your presentation is not clear - whether it's about what you should bring, the content or things like the language - don't hesitate to ask the organisers! There's nothing to be ashamed of; in fact, this only shows that you care about [...] [read more]

Do you know which language your presentation is going to be in? | 1 comments | Create New Account

With this type of organisations you can create very long checklists and still fail due to lack of communication.

A number of times i've been in a similar situation, not necessarily because of uncertainty about language, but because i use a mac and also wanted to check about the aspect ratio of the screens on which i had to present. You ask the organization the question, you let them choose from 4:3, 16:10, 16:9 or other, you check one more time directly ahead of the event (when there still would have been time to make changes), they say it will be 16:9 and when you arrive it appears to be anything but 16:9.

The guys seem to be focus on getting the presentation summaries in asap and get the ppt file on a USB stick asap. No problem if the slides are boring. It's all about standardisation on something that even isn't is an official standard (ppt).

In my opinion, these organisations excel in doing a lousy job, consistently.
[ Reply to This | # ]