Much has been written about the presentation style of Steve Jobs. For years, his style was also the style of Apple, the company that he founded and later saved from extinction. Now that he's no longer with us, the question was how would Apple's presentation style develop?

I think we saw the answer at the WWDC keynote last week. For the first time after Steve Jobs' death, the entire 2 hour presentation of new products looked consistent and each of the actors, so to speak, has found their place - and they are comfortable in it.

Apple wisely decided that no single person could replace Jobs, not even the CEO, Tim Cook. What we saw was a team effort, with each member picking up one piece of the role. What didn't change, and what held it all together, was the overall presentation style: dark backgrounds, huge graphics, few words, no (explicit) bullet points. Nothing has changed here, nor did it need change.

What was also obvious was that everybody enjoyed being up on the stage. The joy of being able to talk about these new and upcoming products was almost tangible. 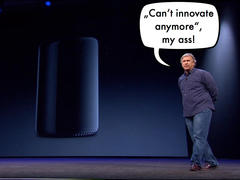 I like Phil Schiller's style - he's laid back but has his facts down straight. And he delivered the most notable punchline of the morning. Over the past months, Apple has been criticised as not being innovative any more (as if churning out a new revolutionary product every 6 months were a requirement for being innovative, but I disgress). After giving a rare preview of a not-quite finished new product, the revamped Mac Pro with its surprising new design, he let out his frustration over these comments:

Now that is something you don't hear from a company Vice President on stage every day!

As Carmine Gallo points out, it's good to show your passion on stage (even with a somewhat "risky" comment like that). And it was no spontaneous outburst - it was a carefully choreographed moment. You can watch it in the available recording, starting pretty much exactly 55 minutes in: After showing the teaser video, Phil Schiller stands (from the audience's point of view) to the right of the slide with the Mac Pro on it. He waits for the applause to die down. As he moves to the left side of the screen, he directs the words at the audience and then looks at the photo as he passes the slide to underscore his point. 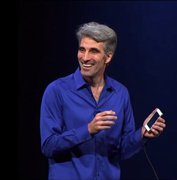 The star of the show, however, was Craig Federighi, who got up on stage twice, to talk about the new versions of Apple's operation systems, Mac OS X and iOS. He obviously had a lot of fun showing off the new features. Just skipping through his presentation at random, I can't help but notice his facial expressions - he's animated, he grimaces, he obviously enjoys what he's doing. And he got to crack quite a few jokes at Apple's own expense, by slamming the much-discussed skeuomorphic design that has been so prominent in previous incarnations of Apple's software products: No virtual cows were harmed in the making of this software. (Calendar got rid of the fake leather surroundings).

What's interesting here is that Steve Jobs was apparently the main supporter of this skeuomorphic design. So in a way, this also marks Apple's departure from at least a tiny bit of Steve's legacy. The new mission statement video is another such subtle message. They mark the beginning of a new era.

Tim Cook's role in all of this seems to be restricted to that of Master of Ceremony. He does the introductions, provides the framework programme and talks about Apple's overall success, but when it comes down to products, he lets the heads of each department take over the stage instead. On the one hand, this goes to show what I wrote before - that no one person is supposed to replace Steve Jobs. On the other hand, however, I agree with Guy Kawasaki who thinks that "real CEOs demo". Especially in the case of Apple, who produce all these products which are supposedly so easy to use - what does it say if their CEO isn't using them on stage? Apple will have to find a balance between these two approaches. Granted, this time most of the products weren't finished yet and were mostly refinements of existing products. Also, this was a developer conference, so the audience, at least in theory, was more interested in technical details. The department head has more credibility in these circumstances than the CEO.

We'll have to wait and see if Tim Cook will demo the next entirely new product that Apple comes up with (whatever it may be) himself. I'd be willing to bet that he will, actually.

(The photos are screenshots from the podcast video, available via iTunes)

Here's what others have to say about 'Apple's Presentation Style after Steve Jobs':

[...] Styles. After this week’s slightly lackluster iPhone announcement, someone examined Tim Cook and company’s presentation styles . Event Social Media Do’s and Don’ts. Believe it or not, there is proper social media [...] [read more]

[...] new products at one of their keynote events, there is this inevitable comparison with the late Steve Jobs. I've written about it before and really thought we'd be done with it. Everyone on the team at Apple has now found their role in these [...] [read more]