This article may seem somewhat off-topic for this blog, but it is at least partially relevant for those of us who use their iPad for presenting:

One of the limitations of the iPad (and other iOS devices) is that you are stuck with the fonts that Apple provides. There is no official way to add custom fonts. I'm usually somewhat conservative in my choice of fonts anyway, but sometimes, it would be nice to have a fancy font for special effects.

A developer has now found a way to install custom fonts on devices running iOS 7. It is in no way officially sanctioned, so it may stop working at any time with a future iOS update. On the other hand, as I understand it, it's not really a "hack" either, since it uses a feature that was only introduced in iOS 7 (though maybe not for this purpose).

In any case, the app is called AnyFont and you should use it at your own risk. 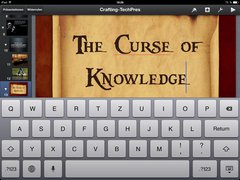 Here's an example: I use a slide with a fancy (and free) font called "Pieces of Eight" to emulate the look of an old document. I have this font installed on my Mac, but until now, when I wanted to use it on the iPad, I had to take a screenshot and use it as an image on a slide. Which, of course, I can't edit on the iPad.

FondFont is similar to AnyFont but supports .ttc format fonts as a plus: https://itunes.apple.com/us/app/fondfont-install-any-font/id842109099?mt=8. Declaration: I'm the developer.
[ Reply to This | # ]
I bought your app FontFont but I have no idea how to get the extra fonts. I sent you an email in the hopes that you would give a step by step procedure, but you did not respond to me.
[ Reply to This | # ]