In my ongoing exploration of the local startup scene, I got to watch yet another pitching contest. In this case, it was sort of a relegation round as part of a series of pitching events: Those startups who won the audience vote in previous contests but did not win the actual contest were given another chance. So we got to see pitches from teams that had been through all this before. 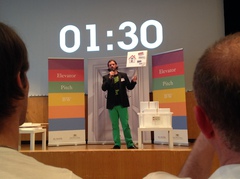 The rules were simple: The startups had 3 minutes to pitch their idea and another 3 minutes to answer questions from the jury. If they went over time, they were cut off by the audience applauding (a nice and effective way to handle that, btw). The presentations were without slides, at least in the traditional sense ...

In the context of this site, I'll try not to comment on the viability of their respective business models but concentrate on the presentation.

The first startup were 3 women offering cake in a small glass, mainly meant to be sold as a gift. They did of course show off their product so that the audience got a good impression of what they would get. I thought the presentation was solid but nothing remarkable. They also handled the questions from the jury well. I got the impression that the audience was a bit disappointed that the cakes were not home-made, but then again they had the inevitable scalability question from the jury already covered that way.

The second startup are working on an electric version of a wheeled walker (what's commonly known as a "rollator") for the elderly. The idea being that by adding a motor, the rollator would be "weightless" when going uphill and not run away when going downhill. I had seen these guys present before and have to say that their presentation has improved a lot. Not only did their prototype look much better than the last time, but they also appeared much more professional and relaxed. In fact I had suggested to them that the person who did most of the presentation last time should step back a little and let the others do a bigger part, since he's a fast speaker and came across as rather hectic. Apparently, I wasn't the first one to mention that and I'm glad to see that they did indeed change their approach. They also had all the concerns of the jury covered (for example, that the rollator would qualify as a medical device and need a special licence).

Next came a one-woman startup. She offers "translations" of complex texts into a more simplified German. That she mostly read her presentation from a script (placed on the bottom in front of her) didn't make for the most convincing performance, though. It's perfectly okay to read examples of the texts you're working with from a piece of paper but you should at the very least be able to remember the contents of a 3-minute presentation. There was also some confusion among the jury if a single person would even count as a startup and she only had a rather unconvincing answer to the question about scalability. So overall, I have to say, while this is undoubtly a useful service, it wasn't very convincing as a startup idea.

The concept of the next startup was bordering on a non-profit. I liked his presentation style, which was to support his points by holding up self-made signs on a stick. The illustrations on the signs were a bit small, though, and probably not recognisable from the back of the room. This presenter was also the only one who had his timing down pat and finished a few seconds early.

The last startup showed a massive presence - five people ended up on stage. They started with apologising that one of their colleagues had apparently not arrived yet and they were wondering if he might still be looking for a parking spot; when that colleague came up running to the stage and explained that that's exactly what had happened. At which point it became clear that this was all staged and that the point of their startup was to help find a parking spot. During the short presentation, the team took off their jackets one by one, revealing printed tshirts that had the "slides" on them. So overall, this was a well-choreographed presentation. It did, however not quite work out time-wise (the "late" colleague had taken too long to get to the stage). It also came across as a bit too well-rehearsed (didn't I just write about that?) - all the other startups had used what sounded like natural language, but this team had a lot of obviously memorized lines.

In the end, the rollator team won, apparently by a very small margin. I don't know who made second place (it wasn't announced) but my guess would be the non-profit with the signs-on-a-stick. One criterium that the jury was looking for and that I didn't cover here was of course the viability of the business model, and I guess the rollator team had a clear advantage here. Congrats!

(photos by yours truly)

Here's what others have to say about '5 More Pitching Observations':

[...] So you have to make sure that people in the back of the room can still make out the content. Instead of signs, I've seen people use tshirts with their "slides" printed on them. Again, the information you present must be simple and clearly [...] [read more]

[...] TEDx with their 18-minute rule, Pecha Kucha with its 20x20 format, or pitching competitions where you have 3 minutes and no slides - often result in great talks. You have to accept the constraints, of course, for it to work. Trying to cut [...] [read more]

Looks like the rollator team then went on and won the final round of this series of elevator pitches. So, congrats again! Good job on improving that presentation.